Good: Enhances virtually every aspect of the game.

Bad: But does so very minimally

As with most expansion packs, Warlords seeks to enhance the Civilization IV gameplay with new civilizations and leaders, modded scenarios, diplomatic relationships, and of course the Warlord leader unit. You'll also receive all the latest patches in case you haven't been keeping up to date with those, which is important considering that the original product shipped with some very troublesome bugs that have since been fixed. Every Civilization game (including Alpha Centauri) has received at least one expansion pack, so the series is no stranger to the concept.

Six new civilizations have been added to the already extensive lineup, including the Carthaginians, Koreans, Vikings, Celts, Ottomans and finally the venerable Zulu. Each new civilization also received their own unique units and leaders, just as they're counterparts have. These new nations certainly add some variety, but for the most part they are just different combinations of the same traits that the other civilizations use, with a couple of new leader traits tossed into the mix.

Warlords also introduced three new world wonders, the "Temple of Artemis", the "University of Sankore" and the "Great Wall". The "University of Sankore" is my personal favorite as it allows your essential religious buildings to produce research, making it a very valuable early asset in the game. The Great Wall builds a giant wall that surrounds your civilization's territorial borders on the turn in which it is built and is able to keep out barbarian raiders. The Wall does not grow as your civilization expands, but not having to worry about barbarians so early in the game can allow you to grow rapidly without hindrance early on. 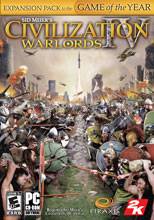 In addition to the civilization-specific units that were added for each new civ, they also introduced the Trireme and the Trebuchet units. The trireme makes naval warfare much more interesting in the ancient era and functions very similarly to a caravel in that it can carry settlers, explorers, spies, etc. Now you can build an offensively designed naval unit with which to battle those pesky invading galleys. The trebuchet is a very powerful range weapon that can bring down city defenses in a flash. Naturally it is relatively weak when defending, but should be an invaluable part of any invasion stack to soften enemy cities for your attack.

The A.I. is now much more adept at naval combat and has been tweaked to be slightly more aggressive in general. In previous games the A.I. has always been relatively weak in a military sense, especially in the latter years of game. So it is rather refreshing to see the "computer" being able to fight back and hold its own. The improvements do not make a night & day difference, but it is noticeable and I personally approve of the upgrade.

In keeping with the title's name, Great Generals (warlords) have been added to the game's list of great people. This unit can be attached to individual units that will give them small military bonuses and experience. It can also build a military academy within a city that grants two experience upgrades to every unit built in that city or increase the rate at which the city can build those units. Both of these improvements last for the duration of the game, making the Great General a very powerful unit and rounds out the other great leaders very well.

Warlords has also given the diplomatic game a new diplomatic relationship option. Similar to what occurred in WWII when a large portion of France became a sub-state of the Nazi "empire", the vassal state relationship is useful when you are soundly defeating your enemy on the battlefield but have not yet destroyed them. That civilization might offer to become a vassal state to you (or you can give the option to them) in which they will become subservient to you in many respects. You gain credit for 50% of their land for the purposes of a territory victory, they must join your side in any war, for which they can not start themselves, and they must vote with you in every election/vote. Additionally, you can make any demand of them that you wish, whether it be ordering them to give you their only wine resources or money or technology and their only options are either to give in to your demands or resume a state of war with you. In fact, only the vassal state can end the relationship and only by choosing to not comply with your demands, so these decisions should be considered carefully before entering into one. Your civilization may also become the vassal state of another nation if you so choose, but again, it primarily benefits the stronger player.

Lastly, eight new scenarios have been included to divert your attention from the main game when you are ready for a distraction. They vary greatly from the Rise of Rome, to the Vikings, to the powerful Mongol empire. In previous Civilization expansion packs, I've never spent much time on the scenarios, except for perhaps the standard WWII scenario that has been included in nearly every game until this one. I did however very much enjoy the Barbarian scenario where you get to take control of the barbarian hordes in which you earn gold for defeating your enemies which allow you to buy more units and hopefully topple all the world's civilizations, with global destruction being your only goal.

Overall, I have found myself somewhat conflicted with this expansion pack. This package has added just a little bit of extra content to every category of the game, rather than focusing on one particular aspect and dynamically changing the gameplay within it. I can't really fault the product for this, as it has certainly accomplished it's goal of expanding upon all the original elements of the game in an interesting way, but it still feels less than complete. You could play through an entire match and hardly notice any of the changes at all, which doesn't make you feel very good about spending $30 for what should be an enhanced experience.

The "warlords" concept is actually a very small part of the package, but then again all of the improvements are relatively small in the grand scheme of the enormous game that is Civilization IV, so I suppose they had to name it after something. With that said, as a huge Civilization fan, I still enjoyed this expansion. While the changes are few and generally small, they do add to the wide array of strategic options available and offer just enough variety to make you want to pull the game out of the digital closet all over again. Hardcore Civ fans and those who enjoyed the scenarios found in older expansions for Civ II & III will enjoy this upgrade, while others could probably do without it or wait for this to hit the bargain bin. Either way, consider this a noble effort from the Firaxis team.