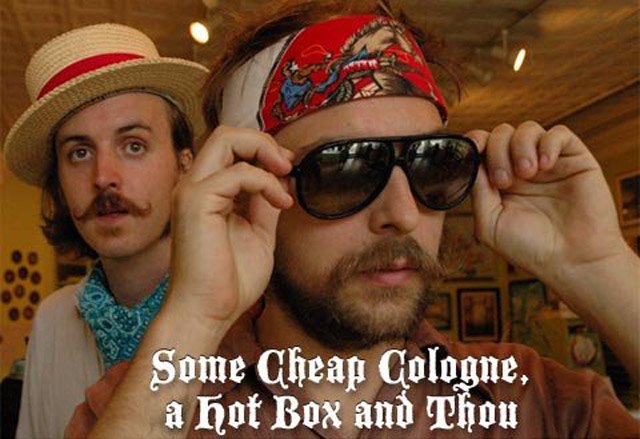 If post-Beat writer Richard Brautigan had been a musician, he might have sounded something like Drakkar Sauna. Employing natty haberdashery and a contraption called the harmophone, the Sauna crafts gleeful ditties about things that few humans can comprehend - the etiquette of dueling, cannibal metaphysics, Spanish cinema - and you can sing along to it all. Misters Stolz and Cochran, the Sauna's Marxist (Groucho) masterminds, step cautiously into the fur-lined lawrence.com podcast villa to promote their forthcoming release "Jabraham Lincoln" - which they refuse to do, and instead wind up pole-dancing blindfolded to old Dolly Parton songs. Accept no substitutes! When Drakkar Sauna is around, everything's right with the world.

Folk, rock, bluegrass: what is it?

"Jabraham Lincoln is the title of your new release, coming out August 25th.

Cochran: It was recorded between November 2005 and April of this year. It was recorded in town and in Merriam, Kansas, with various recording artists and producers. It is part of the Dane Serial.

Cochran: I don't think we ever wrote a murder ballad. Maybe we've covered one. I'm not a talented enough musician to be deconstructive. Jeff can deconstruct things but only with his feet.

Jeff, you're being very quiet. How would you describe your sound?

Stolz: I try not to. I avoid it at all costs.

Cochran: Pop-country is how he defines it.

A lot of local musicians think of Lawrence as a great incubator but it really isn't a great place to make a living as a musician.

Cochran: I don't know what that means. There are so many places to play here and you get paid. You might not get paid enough to make rent every month but you're not going to do that in Brooklyn either.

Stolz: I think a lot of people that move away come back. It's a good place to keep going, here. It's a good way of life.

Stolz: It's a little air-powered organ packed in a carrying suitcase.

There's a story about a tambourine shoe. Wasn't that an effort to make you obsolete, Wallace?"

Cochran: Jeff decided that he could replace both Chris [Kuhlman, former band member] and me as a percussionist with his other foot that he wasn't using, because his left foot was really just going to waste. And so he replaced me and Chris with his other foot.

Cochran: Since then. About two years now.

Why is Mandy Patinkin listed as one of your influences?

Cochran: On his self-titled album of show tunes he does an acapella version of "Sonny Boy," he does "Over the Rainbow". It's actually 26 songs-it's something you just have to let take you over. It's very emotional and it's influenced my singing and songwriting-and Jeff's as well, though it's almost too powerful and emotional for him.

Stolz: It's very emotional for me.

What other music makes you emotional?

Stolz: The Louvin Brothers are a great band for me. I've spent years listening to them. Ira, he's the high harmony singer of the two, a beautiful, beautiful voice. And he had a beautiful life, too.

Elaborate on that a bit.

Stolz: I think he might have been slapping around on his wife. He hit her with a frying pan and then she shot him four times. And he lived. For a year. And then died in a horrible car accident.

Cochran: He also believed in the material existence of the Devil, and set about half a ton of tires on fire to represent Hell. For an album cover.

Jeff, where did the name 'Drakkar Sauna' come from?

Cochran: Don't tell him that. Refuse to answer that question, Jeff.

Stolz: I'm going to have to refuse it.