Anticipated since the unveiling of the Xbox 360, the final version of Dead Rising is a truly conflicted title. Much fun can be had slashing through hordes of hundreds of zombies with a huge arsenal of weapons, but there are also tons of problems with the game.

Williamette Parkview Mall is the setting for a zombie outbreak that is obviously inspired by the 1978 classic film Dawn of the Dead (the game even has a disclaimer upon startup that states it has no connection with the movie). Little is known about the cause of the crisis, and players assume the role of photographer Frank West to get to the bottom of it. 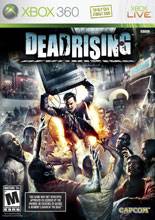 Frank starts out armed only with his camera, which you'll have for the entire game. Dead Rising wastes no time in throwing you right into the action, as the main areas of the mall are heavily populated with zombies right from the beginning. Since he's not a soldier of any regard, Frank must make do with the various items he finds in stores to fend off the undead.

The huge amount and variety of weapons is one of Dead Rising's best aspects. You'll be able to use guitars, cash registers, cactuses, katanas, guns, lead pipes, mannequins, soccer balls, teddy bears, and countless other items to repel the zombie hordes. Some of these are hugely useful (katanas, guns), and others are purely for comic effect (toy laser swords, Frisbees, squirt guns).

When you first start the game, Frank is actually very weak. He'll move slow, have limited health, and only a few available spaces to store weapons. As you progress and earn "PP" (prestige points), however, all of these areas will improve greatly. In fact, the first time you go through the game isn't nearly as good as the second, as your stats and upgrades carry over on subsequent playthroughs. Bosses that seemed impossible the first time will fall easily once you're leveled up significantly.

PP is earned in various ways. Simply slaughtering zombies won't get you very much, but defeating bosses certainly will. The best way to earn points is by escorting survivors out of the main mall area and into the security room. A huge bonus is rewarded for simply talking survivors in to following you, and a second bonus is yours upon delivery.

Another useful method for earning points is by taking pictures of various events. The more outrageous/violent/humorous the picture is, the more PP you earn. For example, a picture of a crowd of zombies might only get you 300 PP, but if you spill gumballs all over the floor and snap a shot of that crowd in mid-fall, you might get 3,000.

On the first playthrough, Dead Rising can be absolutely infuriating at many points. Because of your limited abilities and stats, it's far too easy to die at the hands of zombies or cheap boss A.I. This is in no way helped by the ridiculously bad save system. Players are only allowed one save slot per Xbox 360, so you're completely out of luck if you save at the wrong time.

Here's where the problem with the save system lies. All missions in Dead Rising are based on time limitations. To activate a mission, you must be at a certain point at a designated time. Let's say that you've spent six or seven hours doing all the main missions, and you've almost beat the game. It's possible for the mission location to be at one end of the mall, and you to save at another end, completely screwing yourself over. No matter how many times you reload your file, it can be physically impossible to make it to the location in time. Multiple save slots are a given in action/adventure games, so it's entirely inexcusable for a time-based game like this not to include them.

Little annoyances plague the entire gameplay experience. Otis the janitor is constantly calling you on the walkie-talkie, which becomes a huge pain when you're in the middle of an intense boss fight or especially zombie-plagued hallway. You're also unable to jump or fight while talking to him. This means you have to simply run through massive amounts of enemies with a walkie-talkie to your ear, with no means of defending yourself.

Escorting survivors is also a monumental pain. In the rare instance that you're allowed to carry them on your back or hold hands, it's fairly easy. Unfortunately, most will require you to press Y to have them follow you, and they have a tendency to get mauled by mobs of zombies every time. Even if you arm them with a weapon, the survivors are a huge pain and almost always run headfirst into certain death. There were several occasions where I would try to clear out the mob around the survivor, but accidentally killed them instead.

All weapons eventually break once you use them enough, which poses one problem. Let's say you're in the middle of a difficult boss fight, and you only have one health item in your inventory. You'll be hitting the X button a lot to attack the boss, and it will switch to the next inventory item when the weapon breaks. If the health item happens to be next in line, you'll accidentally use it when you don't need to.

You'll unlock new moves as you progress, and these are also poorly implemented. The "flying dodge" in particular tends to activate when you don't want it to. Others involve awkward uses of the left analog stick in conjunction with face buttons, and you're usually better off just using standard weapon attacks.

Boss fights are extremely annoying and poorly designed for the most part. They're challenging, but not in the good way. It's more like the "well, I guess I have to find the glitch I can use to exploit this guy" challenging. A great example is the gun store owner. You can't use melee attacks, so guns are the only way to go. He tends to constantly blast you with the shotgun, and the only way I could beat him was by hiding behind a certain store display. For some reason, his bullets couldn't hit me in my position, but I could hit him. Many fights follow this "find the place they can't hit you and exploit it" pattern.

On the visual end, Dead Rising is simultaneously impressive and underwhelming. The sheer number of zombies onscreen is truly incredible, and slowdown is virtually nonexistent. You can plow through 1,000 zombies with a motorcycle without the slightest hiccup in performance. Despite this, the individual characters and environments aren't terribly impressive during gameplay. During the cutscenes, however, they're very detailed and feature some great facial animations.

While it's certainly zombie-themed, it features some very different musical choices than other games like Resident Evil. Rather than generic horror music, Dead Rising features easy-listening music like you'd hear in an actual mall. It really does help the atmosphere, and actually makes the whole situation a little creepier. All of the sound effects are spot-on, from the sword ripping through flesh to the revving of the chainsaw.

I've spent a good majority of this review ripping on some of the game's features, but don't let it dissuade you from checking this title out. Despite its many flaws and annoying aspects, it's actually a blast to play at times. To truly enjoy it, I'd highly recommend avoiding the main cases on the first playthrough, and use that time to simply level up in preparation for the second time. Bosses will be less annoying, you'll be able to carry more items, and you can run around the mall much faster. If a sequel could address the easily fixable issues in this game, it would be an excellent title. As it is, it's hard to not call it somewhat of a disappointment.