For most musicians it's quite enough to use art as a way to come to terms with one's mortality, but its quite another to fight back one's mortality with that very art. It's the sort of challenge that is only possible when you're a musician cut from the cloth that Kirk Rundstrom is.

When it was announced that Rundstrom would be returning to the stage despite a cynical prognosis, the words "farewell tour" started getting thrown around pretty quickly. As anyone who was witness to Split Lip Rayfield's recent barnstormer around Kansas can testify, fact is: no one in this band seems to be interested in surrendering shit.

Sure some concessions have to be made in the name of reason. Where Rundstrom used to stalk around the stage and jump into a chorus with wild-eyed intensity, now the man takes it a little easier. There's less jumping for certain, but dammit, if you've seen the man play recently you know too well those eyes are just as intense. This is a man that means exactly what he's doing.

Maybe on the first night back, at Davey's Uptown in Kansas City one might have been left to wonder. There was certainly a strange combination of tensions swirling in the air.

First off, Wayne Gottstine's mandolin is back in the line-up and this was to be his first night back. Secondly, the word on Rundstrom's illness had him on the brink of death - having already outlived the long end of his doctor's life expectancy prognosis. To compound all of this, with Rundstrom's new health concerns, very little time had been left for rehearsing. One could be forgiven for wondering if this would be little more than a ghost of a band living out its former life.

That was hardly the case. It's difficult to imagine Split Lip not sounding tight, and this tour yielded no such fodder for the imagination. With twisting arrangements that have the four trading solos on a dime against dizzying time signatures, the band makes it all look so effortless. That said, there was a palpable tentativeness to the performance that first night at Davey's. On the scale of most bands you could say it was spirited and raw; but not on the Split Lip Rayfield meter. For them it was clear that there was a lot left unsure for them, and the restraint kept the band from truly taking flight as fans have become so accustomed to. At worst, though, one could only call it opening-night jitters.

It was clearly an emotional moment for the band and its audience alike. If one knows anything about the Split Lip catalog, it's that the subject of death is ever-present. Through the compositions of the band's four albums, the Grim Reaper gets name-checked about as often as money gets referenced in rap records. Old lyrics that might have sounded like so much posturing before, now seemed to have a new resonance. Early in the show, with the lyrics "Now I can't stand losing you" from the band's song "Used To Be" hanging in the air, a thunderous ovation for Rundstrom nearly moved him tears.

All of the tension, however, seemed to disintegrate the second night, when the band returned to its home at The Bottleneck. With an audience filled with the familiar faces of friends, the band began to visibly have fun. The temperature in the 'Neck was sweltering and the thirsty, sold-out crowd was in the mood for a party. This was clearly the band's natural environment. The audience's expectations for the show were for business-as-usual and it seemed to invigorate the band and remind them of just who they were.

Rundstrom is well known for being an over-achiever (the guy's got at least three bands), but seeing Split Lip Rayfield play there can be no question as to why this one has taken off over the others. In this group he's found three rare men capable of bringing intensity to match his own. Bassist Jeff Eaton's energy alone could probably power downtown Lawrence. Sure his homemade one-string bass is interesting to look at, but not nearly so much so as the full-on investment he brings to playing it. With his fingers taped-up to the point that he could be wearing a gauze glove, it's clear that the songs get hold of him on a spiritual level; to the point that any pain from banging out the propulsive rhythms of the songs must become a non-issue.

The third night at Manhattan's Auntie Mae's proved to be an animal all its own. The crowd was brought into the venue at 5 p.m., and with a suspicious fire marshal looking on, the capacity crowd was more or less stuck in the bar for seven-and-a-half hours. That, compounded with the set-up of the venue (a noisy basement bar with an incredibly tiny performing space), meant that the crowd had energy to spare once the band took the floor at half-past midnight. Once on, however, the band brought an intensity akin to the best of their glory days.

In particular, Eric Mardis wielded his banjo like he was playing metal axe. The audience was at eye level and the adoring crowd shouted every lyric back at the band. Mardis kept matching the energy level and raising them a buck at every pass. By the time the band settled into its customary closer of "San Antone," Mardis looked like he could throw his banjo into his amp at any moment. All while providing effortless, textural banjo parts that prove this band could be a true, kick-ass bluegrass band if only they could be bothered with it.

Even better, the fun level was rising again. Rundstrom joked around, alluding to the subject of his illness and proclaiming that the doctors had told him the only booze he could drink was Weller's. As the fun level rose, so sank the notion that this was anything of a farewell tour.

Split Lip Rayfield at the Cotillion 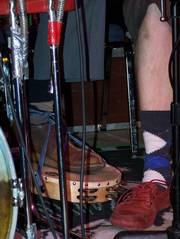 The fourth night meant a much larger venue - Wichita's Cotillion Ballroom. The crowd that arrived early was easily the mini-tour's most diverse audience. Older, calmer fans staked out the tables surrounding the main dance floor, while the usual younger die-hards jockeyed for position up-front. The celebratory nature of the tour really began to shine through as the audience came to bring their love to the band (the line at the merch table extended tens of yards and for almost the entire duration of the show, selling out shortly after the band's set).

Further, the band stepped up their professionalism, displaying a deft showmanship that explains why they're an act with a dedicated national following (fans flew in for the shows from as far away as Arizona, Florida and New York). Already renowned for being able to work a crowd like none other, the band's playing was spot on and triumphant. Again, the celebratory nature of this tour exposed itself. It must have, as even Rundstrom seemed to have been swept up in the moment, going airborne for his first jump since the band's return. It was a short moment and it only happened once, but for a band dealing with so much gravity, he could have been hovering near the lighting rig for the entirety of the show.

The fifth and final show of the Kansas run had the band back at the 'Neck for what was in essence a command performance. So quickly had the first performance sold out that a second show was mercifully added - selling out nearly before the announcement was made public. This time it was an all-ages show and on a Monday. That meant an earlier start and this time, the drinkers in the audience were playing it a little closer to the vest. Not so much so that there was any less enthusiasm, but instead of raucous energy, it was clearly a crowd there to savor the moment and the band repaid that attention in kind.

Gottstine played to the crowd like he was singing to his best friends, and truly maybe he was. With a ninja-like precision, his mandolin in particular provided a buoyant lightness that reflected the mood of the crowd and had it dancing, all while revealing the sweet-natured core of the band's relationship with its fans. So much so that it fed back to the band and in turn another tradition was suddenly revisited: Rundstrom was breaking guitar strings again. In other words, back to business as usual.

With the full run of Kansas shows now under their collective belt, the band had reclaimed what had been briefly set aside. And instead of a bittersweet farewell, the shows had shaped up to be anything but a damn funeral. That which has gotten Rundstrom out of his bed and behind a guitar again is neither concession nor resignation. Rather, here is a man responding to difficult circumstances with the very thing that has always provided him strength and motivation: the very power of music itself.

His wild, blue eyes wide-open and defiant, Rundstrom finally lead the crowd in a sing-along during "San Antone," with the thunderous collective challenging, "If you wanna die with me, lets go." For the band and its fans, never was it clearer that even if death is actually coming for Rundstrom, it's not going to get him without one hell of a fight. Rarely does music come this inspired, or inspiring.

Rachel, thanks for what has to be the best article/review I have seen on our favorite band - and we live in Tempe, Arizona! after a couple trips to Kansas to see Split Lip Rayfield, and most recently, another flight to Denver to see them again at the Bluebird - all I can say is: WOW! you get it - the whole energy centering, the focus on the now, the music plays the band, you get it! it was nice to have a chance to chat with you at Auntie Maes - and to see the review in print, THANK YOU! keep the love strong - as I heard someone say in Denver: "if one man named Benny Hinn can heal dozens of folks at one of his revivals - maybe a few hundred folks can help heal Kirk". jam on

Thank you so much for the this story! I dont think that the tour and Split lip's legacy and energy could have been summed up in a better manner. I went to the 1st bottleneck show and the show at Mae's and they were nothing short of amazing. You definatley summed up what everyone was thinking at those shows. Kirk is in no way surrendering... this give me even more anticipation for their next KS show at Winfield!