Typical Pedestrian Dialogue: "Damn, them is some fine-ass titties!"

Let's get one thing out of the way right now:in Saints Row, you pour a 40 of malt liquor on your friend's heads to revive them.

With that said, Saints Row is unapologetically derivative of the Grand Theft Auto series. While GTA clones are certainly nothing new in recent years, this title is the first that is arguably superior to Rockstar's baby. To describe them each in a word, GTA would be "more," but Saints Row could be accurately tagged as "better." It may not feature the motorcycles, skydiving, dating, or huge countryside that San Andreas has, but the core gameplay elements are certainly improved.

The words "Grand Theft Auto" will certainly be thrown around a lot in any opinion of the game, but it's entirely unavoidable. Everything in Saints Row is directly inspired by it, including the trademark overtly sexual jokes and multiple radio stations. Outside of these cosmetics similarities, SR does a great job of adding slight improvements to the elements of GTA.

For example, whereas GTA had pimp missions, SR features an escort minigame that includes a good amount of variation. You'll drive around a hooker and a customer in the backseat while avoiding the media, but it's not the same thing each time. Some customers will get off by crashing while having sex, others will ask you to take them to the riverfront, and some need to dodge the IRS or even have people killed. While GTA may have tons of activities, there isn't much variety within them. SR presents gamers with a large variety of activities, each with their own level of included variety. 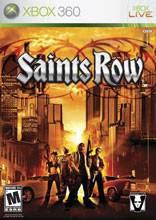 My favorite minigame by far is the Insurance Fraud activity. In this, you need to throw yourself in front of cars, off bridges, or anything else you can find to inflict personal injury. Both trigger buttons will cause your body to go completely limp, which is a hilarious sight thanks to the ragdoll physics engine. It's a blast to run straight at a semi on the highway, then jump into the air and go limp as it sends you flying hundreds of feet.

GTA always had a huge amount of activities available to the gamer, but sometimes it seemed the development team got spread too thin trying to add dozens upon dozens of options. Gunplay was always an issue thanks to its herky-jerky lock-on system. Saints Row features standard right analog stick controls in lieu of the San Andreas style. It's far more responsive, and shooting while driving is worlds better. Rather than requiring the gamer to hold a trigger button to shoot to the side, you can simply move the right analog stick to aim at your target, regardless of where it is.

Missions relating to the main story are presented in a similar fashion as GTA, albeit slightly more open-ended. GTA has set beginning and ending missions for the most part. You can choose which path to take to advance the story, but it always ends the same way. Saints breaks everything up into three distinct story arcs the Vice Kings, Los Carnales, and the Westside Rollerz. Each of these three rival gangs controls a section of Stilwater, and it's your task to take over their turf piece by piece. Rather than a set beginning or end, you can choose to take each gang down in whatever order you'd like. Therefore, one gamer can beat the game with a highway shootout with a big rig, another can finish things with a climactic battle involving shooting down an airplane.

Neat little additions are everywhere. I was scrolling through the pause menu when I started the game, and came across a cell phone. Out of curiosity, I dialed 911 (not really expecting anything to happen). I was greeted with a "help is on the way" and an ambulance that healed my wounds. As you progress, you'll meet characters that you can add to your phone book and call upon. If a situation arises that requires an AK-toting stripper, you can give her a call and she'll come to the rescue.

At the outset of the game, you're given complete creative control over the physical appearance of your character. It features a deep create mode that allows you to modify every facial characteristic, and you can always modify it later with a visit to the plastic surgeon. I started off with Jimi Hendrix, then turned into the spitting image of Axl Rose, and am currently using my Ali G doppelganger. There is a good variety of clothing available at the different stores, although the hair options are a bit more limited.

One of the biggest improvements over GTA is the radar and map system. Rather than simply giving you an arrow with a general direction to travel, Saints Row maps out the actual route you need to take. It's not perfect, as sometimes it will suggest you go far out of your way, but it works well the large majority of the time.

While Stilwater might not be as ridiculously gigantic as San Andreas, it's still huge and teeming with life. In fact, I prefer this environment to the last GTA game, as I got tired of driving for 10 minutes to get from mission to mission. Saints Row also features a very useful train system, and presents the entire city with virtually no load times.

It's certainly a visual upgrade from GTA, but it still doesn't look entirely next-gen. Graphical glitches happen somewhat frequently, ranging from clipping issues to entire highways and cars disappearing. I was hoping for far more vehicles and pedestrians thanks to the power of the 360, but it's really not very populated. Despite this, the pedestrians themselves are head-and-shoulders better than those in GTA. There is a huge variety in appearance and behavior. Some will be reading maps, hobos will sleep on park benches, and they'll exhibit great animations when attacked.

Perhaps the best (and certainly funniest) visual aspect of the game is the ragdoll physics engine. Running over pedestrians can yield some hilarious results, especially when you send them flying into lightpoles, walls, other cars, etc. During especially violent crashes, you can actually be thrown straight through the windshield and bounce along the street.

Saints Row doesn't quite have the huge library of AAA artists and songs that San Andreas had, opting instead for more under-the-radar (read: cheaper) indie rock bands and rappers. There are a few recognizable tracks ("Overnight Celebrity", "Grindin"), but nothing huge.

Michael Clarke Duncan, Tia Carrere, and David Carradine all lend their voice talents to the title, but most of the secondary voices are fairly generic. Pedestrian dialogue generally consists of sexual jokes along the lines of "Hey baby, want a free facial?"

Gamers have wanted an online GTA-style experience for a long time, but Saints Row's multiplayer probably isn't exactly what they had in mind. Rather than allowing players to explore the city and do missions together, it only offers a few competitive modes and two co-op levels. There is standard deathmatch and team deathmatch, as well as Protect Tha Pimp and Big Ass Chains. The latter is my favorite, and involves snatching tons of necklaces and dropping them off at a designated location before the other players can kill you. Both co-op levels are pretty disappointing and bare-boned, featuring basic run-and-gun style gameplay.

If THQ had slapped "Grand Theft Auto IV" on the front of this box, I don't think anyone would even notice that it wasn't the real deal. It takes everything that was fun about the Rockstar series, and simply polishes all of the important gameplay elements. While it may not be perfect, it's a truly impressive title that any fan of open-ended gameplay is sure to enjoy.

Kudos to you for not docking it huge because of its derivative nature from GTA. I am getting pretty tired of the hypocrisy in many reviews right now. Everyone's raving about how much better it does the "open world" things, but then dock it because GTA was the first mover.

If they were consistent and docked other derivatives, then that's fine. But Halo, Splinter Cell and pretty much every sports game is derivative from something else, but they score in the 9's .

Derivative isn't bad when you do it better than what inspired it.

So yay for this review. Solid stuff!

I don't think reviewers are complaining that it is derivative because of similar gameply types, it's derivative because so much stuff is directly ripped off: plotlines, minigames, HUD graphics, fonts, bottom layouts, etc. Those are the sort of little flourishes developers love to put their unique stamp on.

That being said, the game is fun, and probably worth buying if you can't wait for GTA4. It does have some real nasty graphics bugs though, so be warned.