'Jericho' promotion to include unveiling of Stan Herd's crop art

Hollywood is officially coming to town.

And it's bringing a posse with it.

Next weekend, officials from CBS will usher in camera crews, a helicopter, a television star and even Gov. Kathleen Sebelius to help unveil massive crop art crafted to promote the upcoming fall drama "Jericho," the network announced Wednesday.

"It will receive a mountain of publicity when it's unveiled," said George Schweitzer, president of the CBS Marketing Group. "Hopefully, it will make the show successful."

The show is based in the fictional, post-apocalyptic Kansas town of Jericho, and Schweitzer said the promotional effort in North Lawrence would be the cornerstone for the show's marketing campaign.

The event Sept. 9 will unveil local artist Stan Herd's 20-acre earth artwork based loosely on the show's running logo - a boy watching a mushroom cloud rise in the distance - and Sebelius is expected to proclaim that North Lawrence will change its name to Jericho for the day of Sept. 20, when the show premieres. 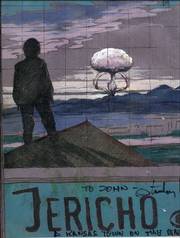 Stan Herd/Special to the Journal-World

This sketch by lawrence artist Stan Herd shows the design for a 20-acre earth artwork he is creating for the new CBS series "Jericho."

Afterward, Sebelius and "Jericho" star Skeet Ulrich will attend a sneak preview of the show at the Lawrence Visitors Center, 402 North Second St.

Herd was commissioned by CBS and has been working on the artwork, on a 45-acre field at Bismarck Gardens, 1616 North 1700 Road, for most of the summer.

Herd crafted the scene using pumpkin squash and corn that the farm sells as squirrel feed, he said. And as with all such advertising, the artwork will prominently feature the show's name, time slot and network: Wednesdays on CBS.

"We gave him the artwork for the show, and he translated it into the beautiful land art," Schweitzer said.

The artwork won't actually appear during the show, but will instead be featured on the station's Web site and during extensive television coverage, including spots on "Entertainment Tonight" and other national shows, Schweitzer said.

Herd and other promoters have also filmed a minidocumentary of the making of the crop art, which CBS will likely promote along with the art on the station's Web site.

Schweitzer said the station wanted to find new ways to promote and advertise its shows and figured using crop art would get people's attention in a crowded advertising marketplace.

Herd said the original idea gained momentum from there.

"Then they started to build on the initial idea, which was pretty simple," he said.

Events set for Sept. 9: ¢ 3:30 p.m.: Stan Herd's "Jericho" crop art unveiling. Gov. Kathleen Sebelius to proclaim the renaming of North Lawrence as Jericho for a day. The event will be at Bismarck Gardens, 1616 North 1700 Road. ¢ 7:30 p.m.: A screening of "Jericho" pilot episode at the Lawrence Visitor Center, 402 North Second St. Sebelius and Jericho star Skeet Ulrich are scheduled to attend. The screening will be followed by a performance by musician Kelly Hunt.

Soon, Herd was discussing changing the name of North Lawrence for a day, a week, even a month. He met with North Lawrence Improvement Assn. President Ted Boyle, Johnny's owner Rick Renfro and others to pitch the idea.

"We wanted to make sure everyone was cool with the name change," Herd said.

Boyle said that the neighborhood was OK with the change, provided the impact on North Lawrence was positive.

Since then, Boyle said, he's been assured that neighborhood businesses would cater the events, ensuring that some out-of-town money is spent in the area.

Now, Boyle said, the neighborhood may even change its name for the whole 11 days between the publicity event and the premiere of the show Sept. 20. He spoke with the city about the idea Wednesday.

"It's going to be real positive for the neighborhood," he said.

Regardless, CBS officials expected Lawrence to find itself in the limelight, if only for a day. Or, as Schweitzer put it, "Lawrence will be the center of the country."

Let CBS know how disappointed you are that all of the free advertisement you gave them evidently didn't matter.