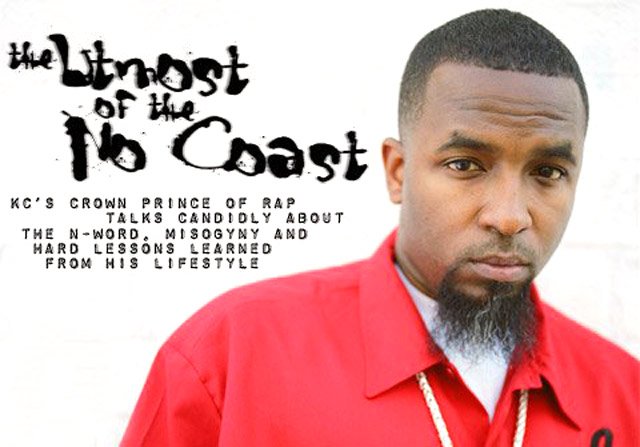 In the Midwest, there is no bigger name in rap than Tech N9ne. Since his 2001 JCOR release "Anghellic," Tech's dark-themed, self-released albums have landed critical praise and impressive sales-thanks to word of mouth, savvy use of the internet, blanket guerilla promotion, and frequent tours. Tech N9ne is a local titan and an indie success story, but he's got much bigger plans. He hopes the recent release of his third major album, "Everready: The Religion," will yield the elusive national break, maybe as soon as January, when many movie-goers will hear his music for the first time in the much-hyped Nick Cassavetes movie "Alpha Dogs."

Street Level picks up the phone in our ho-less podcast studio to chat with Tech N9ne about hard lessons and hard gains, new hairstyles and the n-word, and the Sword of Damocles that is fortune and fame.

lawrence.com: The music papers refer to you as a prime proponent of the Midwestern style: 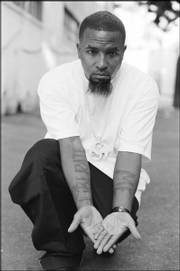 Is the Midwest your strongest fan base?

I know. I go there for Summer Jam and 23,000 people will come and see me. In "Bout Ta Bubble" I said: ":Stormin', in Salt Lake City, performing for Mormons." Crazy.

It seems like the bubble has been bubbling for a long time.

Yes it has. It's been bubbling ever since 2001's release "Anghellic." We grew it from the ground up and it's turning into something monstrous. I'm expecting "Everready" to take us all the way over the top. We deserve platinum-plus success. The reason that hasn't happened is that I haven't had that constant bombardment on TV and radio. : We've been in purgatory for a long time. :But now, heaven will come with "Everready: The Religion."

The paradox is that you're often at odds with the industry. If you succeed in breaking out as an independent, it would be a remarkable feat.

What do you think is the future of the music industry? Are you a pioneer of change?

I feel like I'm at the forefront of the independents. If you look at the cover of the new Source magazine, it says: "Hip Hop States Its Independence." And my name is first. But I think a lot of other artists are going to start going this route. I think that everybody wants to do their own label thing, and state their own independence also.

And what does it take to do that?

A whole bunch of money, man.

You refer to your struggle to "break" as purgatory. Your lyrics often feature themes of suicide and psychosis-embodied by ominous persona: The King, The Clown, and The G. If it does click, will these persona no longer be necessary?

What does The G stand for?

The G stands for gangsta. From back in the day. The G understands pain and strife. He wants no more of it. He wants peace, he wants to relax with his children.

Rap has endured a lot of criticism about it's language and the tone of the music. In today's L.A. Times, Paul Mooney:

Yeah, I know Paul Mooney. They're talking about Michael Richards and him saying the nigger word.

What do you think about that?

If you're on the streets, in the trenches like we are, and you've got white kids calling themselves niggers-it's turned into this word that means partner, or friend. Now, we know that word is forbidden. And you've got the double standard, where us as black folks, we can say it-but you can't say it. We got to be careful how we use it and where we use it.

If that implies a moral responsibility, what about words like "bitch" and "ho"?

Rap isn't the only music to use "bitch" and "ho"-we just frequent those words. Ask Axl Rose if he's ever said "bitch" or "ho." And the reason why they'll continue to exist is that there is such a thing as a bitch, there's such a thing as a ho, and then there's such a thing as a lady. Now, I've been with all three. A bitch will do you wrong behind your back; a ho is paid to have sex; but a woman is respectable, you respect her-you don't say "ho" or "bitch" to that woman. I married a woman, I didn't marry a bitch or a ho. Now, I love bitches and hos and women-I love the female species. :Everybody's entitled to be treated like a human being-that's what I'm on. 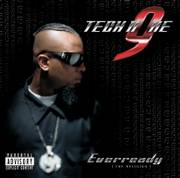 You don't think those words bother women the same way the n-word would bother a black man?

I know it bothers women that we say "bitch" and "ho," but let me tell you: a woman knows she's not a bitch or a ho. And she's supposed to know: "Ain't talking to me when they say that." Like when a cat comes to me and says "You're a dumb nigger." I'll never hear that, 'cause I ain't no dumb nigger.

Do you think an artist has moral responsibilities or is the artist's responsibility just to create and let people learn from that?

I think it goes both ways. If I get out there and say: "Everybody take Ecstasy with me!" and the kids start doing it, then they're going to look at me like: "My kid died because you said that." So we do have a responsibility, we have to be careful with what we say when we tell our stories. : And my story is way morbid-it could be taken the wrong way.

What music has caught your ear lately?

We're playing the hell out of Floetry, a neo-soul, R&B group. We're listening to everything from System of a Down. Anything from Slipknot. We listen to Gnarls Barkley back to back. We listen to Outkast. :This is stuff we listen to on the road.

I'm hearing that your spiky red hairstyle is fading away:

(Laughs) It faded away all right-it fell out. The dye was killing my hair. But after I got it cut off and have seen all the female attention I've been getting since then-I should have cut it a long time ago. Before, I guess I wasn't approachable; I guess everybody was scared because The Clown was out front.