I think that at this point, it's fair to call Smackdown the Madden of wrestling games. We're getting yearly installments with roster updates and a couple more features, so comparisons can certainly be drawn. SvR2007 goes a little beyond that, however, and features a host of customization options and Season Mode storylines.

My favorite new addition to the series is the new Ultimate Control set of moves. Each character is capable of a variety of these, and they provide more control than the simple "press the button and watch the move" standard. By using the analog sticks, you can choose what you want to do next with an opponent, and how hard. If you've got them bench-pressed over your head, you could spin them around in circles or drop them into a backbreaker. If you're slamming their head against the announcer's table, you can do it in quick, sharp bursts or long, protracted blasts. It really is a nice addition to the series, and I'm sure it will be expanded upon in future installments.

There are also environmental hotspots that will allow you to perform situation-specific moves. If you drag a grappled opponent over to the ropes, you can rake their face against them. Taking them to the turnbuckles will initiate an Ultimate Control ten-punch sequence.

In a more minor addition, there is an area of the crowd that you can fight through in the upper-right corner. It's relatively small, but features a decent amount of weapons and assorted areas to punish your opponent. 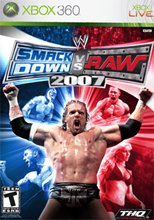 Season mode is certainly well-done, and features storylines and feuds on par with standard WWE programming. You'll go after title shots, deal with HHH as Raw general manager, and participate in the Royal Rumble. There isn't a terribly large amount of decisions you can make, but it's still interesting to watch your character's progression throughout the WWE season.

The engine has been improved upon to varying degrees throughout the years, but still has some noticeable flaws. Collision detection is still an issue, and you'll find yourself missing punches or grapples that clearly should have connected. The targeting system is also cumbersome, and a genuine pain at times. A.I. during season mode is frustrating, and tends to reverse almost everything regardless of what your preferred settings are.

SvR2007 features a healthy roster of active wrestlers and WWE Legends (Bret Hart, Steve Austin, etc), but a lot of it is out of date. Degeneration X is referred to in the frequent load screens, but not at all in the storylines. It's clear that most of the stories were (understandably) written before some of the current gimmicks and factions started in the actual WWE.

One of the most impressive aspects of the game is the unreal amount of customization available. You can create wrestlers, stables, championships, entrances, and more. For the hardcore wrestling fans, you can even manage your own Pay-Per-Views or go through the General Manager mode.

Visually, Smackdown vs. Raw features wrestler likenesses that are as spot-on as ever. On top of the uncanny physical resemblances, their entrances perfectly mimic those in real life (or "real-fake-life", since this is wrestling after all). The crowd is lively and well-animated, although you'll see a good amount of repeat faces. All of the wrestlers that lent voice-overs sound great, and put just as much work into this as they do their in-ring mic work. Unfortunately, the soundtrack during the menus features some horrible songs, and the announcers are constantly repeating themselves.

All in all, Smackdown vs. Raw will do just what it has for the last couple of years. It will satisfy the hardcore wrestling crowd and keep them entertained until the next one comes out, but the casual fan will probably tire of it after finishing the season mode. It's certainly a well-made game in many regards, but outside of the Ultimate Control additions, doesn't feel entirely different from the last couple of installments.