One-man band Craig Comstock at rehearsal for the Glenn Branca Symphony at Vooruit in Gent, Belgium.

As bassist for The Blue Leaves, Craig Comstock works an avant-pop vein; as the one-man band This Is My Condition, he goes for the jugular.

With only a drum kit and an electric guitar, a few effects and a microphone, TIMC transforms simple pop songs into awe-inspiring symphonic explosions. His intense and athletic solo performances are as compelling as his tough and heavy music-which explains Comstock's choice of the DVD format for his eponymous inaugural release, "This Is My Condition." One such performance brought Comstock to the attention of the seminal post-minimalist composer Glenn Branca, who recruited Comstock as a regular touring member of the hundred-guitar Glenn Branca Symphony.

Street Level welcomes the gallant Comstock to share a pot of tea in a garret at the end of a long gravel road, and to contemplate tractor beams of angst, pop music as minimalism, and Bruce Springsteen.

lawrence.com: What was that? You want to be in The Who?

You may be imagining yourself as John Entwistle, but you come off very much like John Cale.

(laughs) I don't do it all that deliberately. But it's all there. It gives me goosebumps.

This Is My Condition

There's nobody like you in Lawrence. You've taken the concept of the one-man band and added a symphonic aspect, and a noise aspect:

You describe yourself as "heavy, tough and intense." :It's the guitar, drums, and, a suitcase full of effects.

:It's an old, no-name guitar I bought at a thrift store with another no-name bass for $35 on Troost Avenue. :There's three effects, that's it-the same three effects I've used for three years. It's a wah pedal, an overdrive pedal-which in this case I use as a bass equalizer-and a loop pedal. :Beat-juggling appealed to me. And TIMC appealed to me because of the physicality of it.

This Is My Condition, live performance from eponymous DVD

Your music is almost cathartic. You're getting a workout physically and-it seems-emotionally.

Yes. I put a whole lot into it.

So you became your own band because nobody else could deliver what you were hearing in you head?

I asked around: "Hey, do you know anybody who wants to play improvised hardcore?" Nobody really clicked. I don't know exactly how I got from that to TIMC, but it's part of the road.

Black Christmas / This Is My Condition

No, it doesn't. I'm a big fan of boisterous noise-rock bands like Unsane or Carp, or their descendants like Big Business, where it's all about the rock. Lately, I've been singing one of my songs in falsetto.

It comes off like a tractor beam of angst, almost.

I've had many people say, "I enjoyed that, but I'm not sure that it was music."

On the other hand, you play with Glenn Branca, who is now being recognized as a great post-minimalist composer.

:He was asked to compose a piece for Steve Reich's 70th birthday celebration in London.

How does 100 electric guitars in concert equate to minimalism?

It's structured as minimalist music-absolute minimalism.

Branca played his 13th Symphony in July 2001 at the base of the World Trade Center, with 100 electric guitars.

That was "Hallucination City." 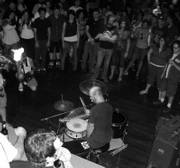 "I've had many people say, 'I enjoyed that, but I'm not sure that it was music'" -Craig Comstock a.k.a. This Is My Condition

Members of Branca's earlier ensemble were Thurston Moore, Lee Renaldo, and Page Hamilton from Helmet. And now you're playing with Branca, touring Europe.

I played a show in New York. Ryan Walsh was a friend of the fellow who put on the show, and Ryan Walsh is a member of Glenn Branca's small band. Ryan heard me play and came up to me and said: "I think you need to be in the Glenn Branca Symphony." I said, "Of course! That would be great." We got in touch later:and I went up an performed the 13th Symphony with them in Montclair, New Jersey. That was the first time.

You've also played around the world?

...I've played in Belgium, The Netherlands, and Germany. I'm a lucky cat. People just seem to be amazed by it, their jaws drop, and I assume by their response that they're inspired. :I like to think that I just let what I'm interested in come out, and that it's going to be unique.

How would TIMC reference himself?

That's the perennial tough question for a band, isn't it? I want to amaze people with physical dexterity and musicianship.

Finally, somebody in this washed out town is doing something new, fresh, and worthwhile. Thank Christ!

The first time I saw TIMC, I couldn't look away. It was absolutely amazing.