Best: Strategy game of the year

With the huge flood of WWII games in recent years, one would imagine the creative well for the setting has just about dried up. Thankfully Relic, the good folks behind the excellent Warhammer 40,000: Dawn of War, have managed to squeeze at least a little more juice out of the genre with Company of Heroes, and the result is easily one of the year's very best PC games and one of the best real-time strategy games in years.

Perhaps the game's biggest feat is the sheer quality of its presentation. Simply put, Company of Heroes in the most immersive WWII game I have ever played, with everything from its excellent graphics to its visceral soundscape bringing the battlefield to life. The level of detail present is astounding. Zooming out, you can view all the destruction from a birds eye view, and up close, things look even more impressive. Character models are exquisitely detailed, tanks are large and threatening, and explosions are terrifyingly life-like.

Things are made even better by the game's sound effects, which are some of the best I've heard in years. Turning up your speakers will make you actually feel as if you're sitting in the middle of a WWII battlefield. Everything from bombs dropping to the echoes of distant gunshots to the screams of dying soldiers gives the combat a realistic and almost emotional edge. The soundtrack also fits the game perfectly with rousing epics during the height of combat juxtaposed by subdued orchestral pieces during the cutscenes. All in all, this game sounds amazing. 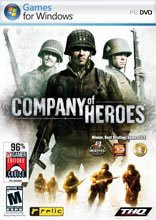 Then there's the gameplay itself, which easily lives up to Relic's exceptional track record with the Homeworld games and the aforementioned Dawn of War. Anyone who played the latter should be instantly familiar with many of Heroes' nuances. The game is sort of a departure from other RTS games in that it focuses more on squad-based combat rather than individual units, as well as territory control over base micromanagement. These are both concepts that were introduced in Dawn of War, and Heroes expands upon them in a number of interesting ways.

For one, Heroes focuses much more on combat tactics than base building. You'll still have to develop a home base, complete with unit-producing structures, but a number of mundane elements from other RTS games are done away with. Most notably, you don't have to worry about mining resources. Rather, by capturing new control points, you will automatically generate the resources necessary to purchase new squads, upgrades, and buildings. This eliminates the hassle of having to micromanage peons. Also, the number of available structures is relatively small compared to other RTS games, but this simply allows you to spend more time focusing on the game's excellent tactical combat.

As previously mentioned, Heroes focuses on squad-based combat, much like Dawn of War. Instead of building individual soldiers, you will train small squads of soldiers, whose numbers can be replenished should individual members fall in combat. You can also choose to outfit your soldiers with different weapon upgrades, which will give them advantages against certain unit types. As your units kill enemy units, they will also gain veterancy, making them more powerful and giving them access to better upgrades.

Once on the battlefield, combat is extremely tactical. Cover becomes extremely important, and anything from a broken down tank to a vacated house can be your troops' best friend. This facet of gameplay is enhanced by the game's fully destructible environments. As mortars and tank blasts rain down on your unsuspecting soldiers, they'll destroy nearby houses, blow down stone walls, and leave ominous smoking craters in the terrain. It's little touches like this that make Heroes' combat seem so authentic and immersive.

Speaking of tanks, the game's handling of vehicles is also worth noting, as it lends a whole new layer of strategy to the firefights. Tanks can take damage in a variety of locations, resulting in disabled weapon systems or complete lack of control. Because of this, it's extremely important to learn how to position your units against enemy tanks to cause maximum damage as well as how to maneuver your own armor units to keep them safe.

As far as replay value, Heroes definitely looks to have some legs, thanks heavily to Relic's excellent online system, which does an excellent job of matching players based on their skill level. The game's campaign is lengthy, and the scenarios are all different and interesting enough to warrant multiple playthroughs on the various difficulty levels. Skirmish mode is also available for those who want to hone their skills before taking them online.

Overall, Company of Heroes is simply a great game, both technically and in terms of gameplay. Before you write off the WWII setting as over-used, give this a try. It's easily one of the most immersive strategy games of this, or any other, year.