Bad: No in-dungeon Save Points

Required: Extraneous leveling and lots of it

Amidst the next-gen excitement of last E3 Square Enix quietly announced that, at long last, they would release Final Fantasy III in North America. Fanboys everywhere tingled with delight.

And for good reason. Final Fantasy III is the best RPG on the DS and a remarkably refreshing entry in the Final Fantasy series because of its simple story and straightforward presentation. There is no love story, no double crosses and no epic revelations, just four characters that have to save the world.

The lack of a driving story allows for much more exploration. Airships have always played a significant role in Final Fantasy games, but here you get one early. This allows you to search far and wide for sidequests and secrets almost immediately, but tread lightly because being able to explore the world early means encountering stronger enemies that could wipe out your fledgling party instantly. 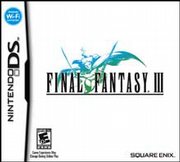 Gameplay relies heavily on the much-lauded Job System. This system, which also appears and FFV and FFXI, allows you to create custom parties by assigning each character a specific job. Each job comes with job-specific abilities and leveling up each job gives experience bonuses to specific attributes. Any character can assume any job, but switching jobs means having to go a certain number of battles with your stats cut in half.

For the most part the system works great. It's highly flexible, allowing you to make a party off all mages, knights, etc., but the key to the Job System is finding a proper balance between classes. It's fun to experiment with and discovering new jobs usually means changing your whole party, but there are times when the game makes certain jobs mandatory. The idea behind this is to encourage experimentation, but for the most part it's annoying and unnecessary.

Another frustrating aspect of the game is the complete lack of save points within dungeons. In the early dungeons this isn't much of a problem, mainly because they're short and easy, but once they get longer and the bosses become more difficult the lack of save points starts to hurt. There is nothing more infuriating in FFIII than working your way through a seemingly easy dungeon only to be wiped out by a cheap boss or lucky critical hit.

Another gameplay element that limits the experience is the reliance on Nintendo's WiFi service. The only way to attain major items like ultimate weapons and a hidden, incredibly powerful job is through the service.

The visuals during this adventure push the DS to its limits. Colors are vibrant and spell effects, especially high-level magic, are remarkable for a DS game. Unfortunately the graphical splendor delays your commands during combat and leaves little room on the cartridge for the soundtrack, which sounds like it belongs in a SNES game. The game also has a nasty habit of recycling enemies, usually just changing the color.

For fans who grew up on classic Final Fantasy gameplay and stories and found XII's tale of political intrigue and the License and Gambit systems to be less than satisfying, this is the Final Fantasy game for you. It features a lengthy quest and one of the deepest combat systems in the series' pedigree. While there isn't much competition on DS at this point, Final Fantasy III is a solid RPG that sets the standard for those to come.