More than any other series I can think of, the Castlevania games have had an extraordinary track record on Nintendo handhelds. Castle of the Moon, Harmony of Dissonance, Aria of Sorrow, Dawn of Sorrow, and now Portrait of Ruin are all fantastic games, and perfect fits for portable gameplay. This new installment omits the tacked-on touchscreen features of Dawn of Sorrow and adds an interesting new twist two playable characters that you can switch between with the press of a button.

Gamers can switch between Jonathan and Charlotte with a press of the X button, and they each feature their own spells and weapons. Jonathan attacks with the standard whips and swords, and Charlotte battles Dracula's minions with magical books. Most of Jonathan's subweapons are projectiles such as knives and axes, and Charlotte features many magic abilities like fire, wind, and ice. Not only can you switch between them at will, but you can summon them to use their subweapon or even fight alongside you.

Some (although not many) sections of the game require a little cooperative problem-solving. It's possible to jump off of your partner's head, make them stay in place, or help you push heavy objects. The game thankfully stays away from tacked-on touchscreen control, but it is possible to direct your partner around the screen by tapping it.

Pressing up and X at the same time activates a co-op attack, and these are crucial during the harder boss fights. Together, Jonathan and Charlotte can summon volcanoes, shoot lightning, and much more. Most of these attacks are devastating when used in the right instance, and oftentimes are the deciding factor in whether you win or lose against a boss. 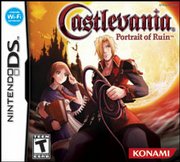 It really does add a nice twist to the gameplay, as it really can add to the strategy of exploring the castle and battling bosses. However, I do miss the soul collection from the last couple of games. Knowing that each enemy possessed a new ability for you to use was a great incentive to really sit down and see everything there is to see.

While there is no shortage of things to do in Portrait of Ruin, it really doesn't take long at all to play through. Most gamers should be able to beat the game in around 7-10 hours, but obtaining 1000% takes far longer. One of my favorite features of the game is the different paintings to explore. Entering one of these takes you to an entirely separate environment from the castle. It's almost like each painting contains a mini-castle of sorts, and helps the game's variety substantially.

Like the rest of the games in the series, Portrait of Ruin is challenging to an almost perfect degree. It's certainly no cakewalk, but it makes sure the difficulty is at a fair level. Save fights are conveniently placed before boss fights, and you can always run around the castle simply leveling up if you're having problems.

Artistically, PoR is perhaps the most beautiful game on the DS. As a sprite-based side-scroller, it doesn't do much to really push the hardware, but its beauty doesn't lie in polygons. Rather, each individual room, enemy, and character looks gorgeous. All of the animations are fantastic, from simple enemy movement to trees whose leaves turn into dozens of bats. All of the audio lives up to the high standard set by the series, and the music sets the mood perfectly.

It may not take long to beat, but everything that the game offers is of the utmost quality. Omitting the touchscreen elements was a great idea, and the ability to switch between characters is a nice twist to the series. Portrait of Ruin belongs in any DS owner's library.