Good: Rips off from the best (Zelda)

Really annoying: The scorpion enemies that take your items

If you're going to steal, you should steal from the best, and the developers of The Ant Bully clearly know this. There are countless aspects of this game that are borrowed directly from the Legend of Zelda series. Jumping is performed automatically rather than with the use of a button. The main character can do a charge attack with his melee weapon. You can use a petal to float from a high area to a lower area, just like the Deku leaf from Wind Waker. Unfortunately, it borrows the mechanics from the classic Nintendo series, but leaves most of the fun behind.

You play as Lucas, the "ant bully" who has been shrunk down to ant size and forced to redeem himself in the insect community. All of the areas are very "Honey, I Shrunk the Kids" in feel, complete with gigantic Lego blocks. While it initially appears to be open-ended, it's actually very linear in nature. You can run around to different ants and accept missions, but you're forced to do them in a certain order throughout most of the game. 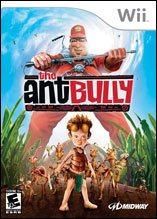 Missions are extremely unoriginal and can be very frustrating at times. Most are straight-up fetch quests that feature you running around whacking spiders and larva with a stick. The problem lies in the numerous missions that require you to collect certain items and return them to the beginning of the stage. Getting to the actual items isn't that difficult, but once you're actually holding them, enemies will swarm you and try to take them away from you. There was more than one instance in which the item was knocked from my hands and into a completely inaccessible area, forcing me to restart the whole mission. This can be infuriating thanks to the lack of a checkpoint system. The difficulty is actually very surprising considering this game is aimed at a younger crowd. One boss fight involves a giant wasp and a stick of dynamite, and I can't imagine many 10-and-unders being able to figure out how to beat it.

The Wii version suffers from the same tacked-on motion controls that other ports have. You can throw items, swing your stick, and a few other minor functions with the Wii-mote, but it really does nothing to enhance the already-bland experience.

It does a decent job of capturing the look of the film, but it's definitely not introducing anything new or impressive in the graphical sense. Textures are fairly muddy and the occasional glitch or graphical hiccup is present. The voice acting is actually pretty good (although clips repeat way too often), but the music is quickly forgettable.

While it's obvious that licensed games based on CG kids movies are usually rushed and sub-par, it's been proven that it doesn't have to be this way. Cars for PSP was a decent racing game, and Monster House for DS was a nice distraction for a while. The Ant Bully, on the other hand, really doesn't give me any reason to recommend it (even for fans of the movie).