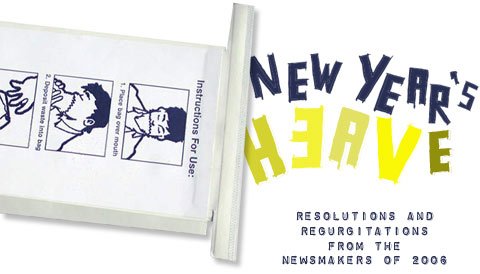 Yes, New Year's celebrations are upon us; those precious few hours when we all get really drunk and try to forget how shitty the previous year was. According to tradition, we wake up the next morning too ashamed to look at ourselves in the mirror after remembering that we made out with our brother-in-law and then threw up in the refrigerator while looking for another bottle of sparkling Champale, and so we are spurred in our hung-over depths to try and stop being such terrible human beings. Thus we make New Year's resolutions to try and better ourselves, perhaps to end unhealthy habits or to further our education. Upon our inevitable failure at reaching even these modest goals, however, we remain the morbidly obese, chemical-addicted morons we were last year. It's with that depressingly prosaic outcome in mind that we here at Punditocracy turn to the New Year's Resolutions of the famous and powerful, because no one cares about the pilates DVD you bought at Target.

And so, without further ado, Punditocracy presents New Year's Heave: Resolutions & Regurgitations from the Newsmakers of 2006!

Text-based version for the audio impaired:

President Bush? "I resolve to learn a new language:maybe English. Then I'll be able to understand all that jibber jabber comin' outta Blair's crumpet-hole. I wish he'd learn to speak American. Actually, I should learn to speak Muslimese. We're gonna invade Iran next year and I wanna be able to say 'You're welcome' in the native tongue of all those adorable, newly liberated sand-people (they remind me of the Jawas from 'Star Wars')."

Senator John Kerry? "I resolve to perfect my impersonation of a humorless automaton and tour the country opening up for Dane Cook. I'll also continue to pursue my life long hobby of not being president with renewed vigor."

Mel Gibson? (translated from Aramaic) "I resolve to give up drinking, complete my community service, and have surgery to remove the sugar-titted, Jewish goblin that lives in my brain."

Outgoing Kansas Attorney General Phill Kline? "I resolve to stop pussy-footing around, go to the National Archives, and physically tear up the Bill of Rights. Also, I plan to get more exercise by swimming in George Tiller's dumpster. I might get in some fishing, as well:mostly bass, some trout, and a lot of private medical records."

Incoming Speaker of the House Nancy Pelosi? "I resolve to hang meat curtains in the Speaker's office. No, literally:they're made out of jerky. It's a hold over from Dennis Hastert. You can snack on them all day. I plan to call Minority Leader John Boehner into my office and ask him if he wants to eat my meat curtains in the spirit of bi-partisanship."

Kansas Senator Sam Brownback? "I resolve to hire a grilled cheese sandwich bearing the image of Jesus Christ as my presidential campaign manager. And if I have time, I'll try to block nominees to federal judgeships if they've seen an episode of 'The L Word'."

Senator Hillary Clinton? "I resolve to purchase a likeable personality and then commence to be advised by pollsters as to what my political convictions should be from week to week. Also, I pledge to continue making Sean Hannity piss his pants and choke on his own froth every time I open my mouth."

Michael Richards? "I resolve to reach out to the Afro-American community:WITH A PITCHFORK AND A NOOSE! I may also look into therapy."

Former Senator George Allen? "I resolve to spend more time with my family. You know:racially profiling our neighbors, attending Civil War reenactments, mutilating animals and stuffing their heads in mail-boxes:family stuff! I also plan on tracking down this Youtube fella, whoever he is, and kicking the macaca out of him!"

Senator Barack Hussein Obama? "I resolve to insure that would-be, bigoted assassins will be more frightened by my successor than of a black president by asking a gay, Islamic Mexican to be my running mate. Also, I really need to change my middle name."

Former Defense Secretary Donald Rumsfeld? "I resolve to enjoy retired life. I'll launch a pre-emptive strike against the weeds in my garden, but refuse to plan for the insurgency of gophers which will emerge from the instability. If I have time, I'll water-board some squirrels. Oh, and I resolve not to leave the United States for fear of being tried on Crimes Against Humanity in an international court:no Carnival Cruise for me, by golly."

Pastor Fred Phelps? "I resolve to begin picketing the funerals of dead children and fallen soldiers in order to garner press for my psychotic homophobia! Oh, wait:I already do that. Um:maybe I'll take a pottery class?"

Former Vice President Al Gore? "I resolve to continue the fight against global warming by replacing the melting ice-caps with my giant, frigid wife Tipper. She'll provide an excellent habitat for polar bears. Also, if 'An Inconvenient Truth' doesn't win Best Documentary at the Oscars, I fully intend to contest the vote all the way to the Supreme Court."

Senator John McCain? "I resolve to strengthen my maverick image by championing the insanely unpopular idea of sending more troops to Iraq and escalating an already disastrous conflict. What could be more independent than supporting a military strategy that not even the military supports? I also resolve to be more forgiving:namely to the people who falsely claimed that I had an illegitimate black child and generally said vile, slanderous things about me to ruin my presidential campaign in 2000. I need those people to give me money and run my presidential campaign in 2008."

Playstation 3? "I resolve to solidify my hardcore status by costing more than the Gross Domestic Product of most African nations, having no more than two playable games and getting people shot over me. I will also continue to get my ass kicked by something called the 'Wii'."

Vice President Dick Cheney? "I resolve to take it easy in the New Year. I plan on only stabbing my friends in the face from now on."

Brittney Spears' Vagina? (translated from flapping sounds) "I resolve to quit puking out neglected children and to cover my mouth in public."

this would've been so much better without the podcast.

it was pretty good though