Platformers are not dead

With more focus clearly being placed on the DS, the last few months have been extremely slow for the Game Boy Advance. With the exception of Mario Power Tennis and Final Fantasy IV Advance, almost everything has been lackluster licensed titles. With the arrival of Drill Dozer, Game Boy Advance owners should be happy to have a unique, fast paced and old-school piece of platforming gameplay.

You assume control of Jill, daughter of the leader of the "Red Dozers" gang of thieves. When a rival group steals the Red Dozer's precious diamond, it's up to her to retrieve it. She's not alone, however, as she's equipped with a powerful drill suit that allows her to burrow through air ducts, certain walls, and countless enemies. It's extremely easy to control Jill, and all drilling is performed using only the shoulder buttons. The L trigger spins the drill to the left, while the R trigger obviously spins it to the right. In most cases, it doesn't matter which direction you spin. In rare instances, certain air ducts and boss battles will require you to go in a certain direction. Rubber blocks are present in some areas that will help you jump to higher platforms. This is accomplished by drilling in one direction into the block, then switching directions to launch backwards. 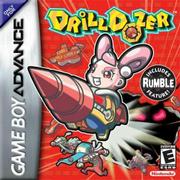 There are plenty of contraptions throughout the levels that make varied use of the drill, such as conveyor belts that require you to drill into a socket in order to move. In one section of the game, EMP bombs are dropping, and you must deactivate them by moving the spray of a fountain underneath them. You do this by drilling into the controls, and drilling left or right in order to move the water. Throughout the game, there is no shortage of uses for the drill.

Each area starts you out with only one gear for your drill suit. As you find the two gear upgrades, you'll be able to drill through harder substances, as well as deal more damage to enemies. When you start to drill, a meter will fill up. Once it reaches its peak, it will tell you to "Shift Up". Pressing the drill button again will shift into the 2nd, and then to the 3rd gear. You can make slight upgrades to your drill in a store area, but there is nothing of significant use other than health upgrades. Later in the game, your drill will get automatically upgraded and even gain the ability to go underwater and fly with the use of a propeller.

For some reason, the game starts off with what is easily the least interesting level. It's not a good first impression, but it makes for a nice surprise when you see how much more complex and entertaining later levels are. Many levels have a certain degree of open-endedness about them, allowing you to go in several different directions at the beginning. Boss fights are one of the best parts of the game, and sometimes reminded me of some classic Mega Man encounters. They're all old-school fights, in which you learn their attack patterns and exploit their weaknesses.

The art style is very cartoony and bright for the most part, and it fits the game well. Drill Dozer's graphics and overall presentation reminded me of the WarioWare series at times. Music is upbeat and very fitting for what's happening onscreen. It also comes with a built-in rumble function within the cartridge.

Drill Dozer is a fairly short game, but you can always go back to previous levels once your drill gets upgraded, giving you access to previously unreachable areas. For GBA owners that are looking for a solid action/platforming experience, Drill Dozer certainly fits the bill.