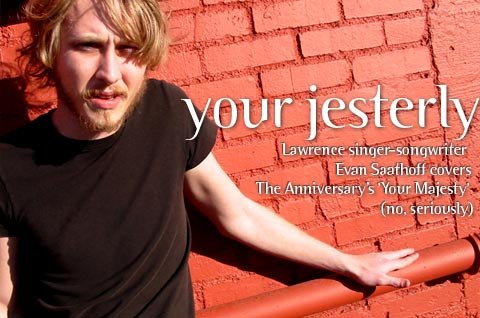 Lawrence singer/songwriter Evan Saathoff just finished covering The Anniversary's "Your Majesty" in its entirety. No, seriously - all 11 songs. We invited the talented songwriter into our podcast booth to explain exactly what the hell was thinking.

lawrence.com: Tell me, Evan - why did you do this?

I have to say it started out as a joke. I was with my friend Adam (Jeffers) and we were listening to it and it just popped into my head: "I should cover this album." I was going to forget I said that, but he kept egging me on. Then we drove around and listened to it and I was like, "Maybe I could do this." I woke up the next day and started working on it.

Once I started, I had to finish it. I don't like to quit things, I guess. A lot of really good things were coming from it, and I saw that if I completed it it would be something worth doing and I'd have learned a lot, which I did.

It's not a joke, but it's definitely, in my opinion, a novelty ... I'm really happy to be done with it, and I'm proud of it.

What was it about this record that piqued your interest?

Well, I like the album a lot. I think it's underrated : They're really well-written pop songs, and I like stuff like that. I guess I wanted to do it for the underdog reason, because it seemed like kind of an underdog album.

So, once you got halfway into this, what did you find yourself realizing about this record?

Well, there are a lot of tricks that are used over and over again.

What kind of tricks?

The first half of the first verse is really quiet and the second half gets really loud and the whole band comes in. It's a good trick.

And you're just using an acoustic guitar?

I had really strict rules for myself that it was only my nylon and my steel-string guitars and my voice : I wanted to limit myself that much, because otherwise it'd be too easy and I could make something that conceivably would sound more like what they did.

So obviously one of the pressing questions is: Have The Anniversary heard this record?

No. Nobody's heard it but Adam Jeffers and my family.

It should be mentioned that this will be available at Love Garden for either $1 or $2.

I want it to be free, honestly. I was going to limit it to a small number and make it free, and it will be on the internet (at evansaathoff.com and right here) and I'll have it at shows and stuff.

So what else are you working on?

I have two albums I'm trying to write. I couldn't really do much about that while I was working on this, because literally I really did work on this pretty much every day from the end of August until a week ago.

Is there currently an Evan Saathoff band?

Yeah, it's sort of shifting constantly but right now it's a three-piece and I think it's about to be a four-piece. Live, I tend to pick the louder songs. I have plans in the future for a four-guitar band where everybody sings, and maybe the live show could sound more like the kind of recordings I like to make.

My next big album is this album I wrote about comic book characters, mostly Batman. I know that sounds stupid, but I think it's going to be a really good album.