A truly memorable experience - this is the crappiest game you'll ever play. EVAR.

Good: You don't have to play it

Bad: I had to play it

Worse: I had to play it even more

Every once in a blue moon, a title falls from the heavens and graces gamers and critics everywhere with a genre-defining, mind-blowing indisputably superior experience that solidifies itself in gaming history. The earth stands still and humanity rejoices as gamers unite as one peaceful Voltron to behold the wonder of that perfect game.

In fact, it might as well be the polar opposite. The cold, dark night to Halo's sunny day. The festering Satan to blissful baby Jesus. The 21st century's answer to Superman 64. In short, 25 to Life (25TL) is the worst possible use of your money and time.

25TL holds the power to taint gamers with a cynicism that pours over into other gaming experiences, if not info life itself. I have never felt more frustrated, more insulted and more sorry for the world due to a game. 25TL is wrong on every level - not only is gameplay terrible, everything from the story down to the ambient details screams bogus, dehumanizing stereotypes.

"Your knowledge of the streets will be put to the test because 25 to Life IS the streets." That's right, yo.

The first character you control named - a scowling G identifiable by his Flava-Flav caliber bling and Garth Brooks-style belt buckle that reads "Freeze." Freeze is BAD ASS, yo.

Freeze wants to get out of gang life. But guess what? To do so, he's gotta do this ONE LAST DEAL - basically killing a bunch of cops. That's how it's done in the streets, yo. 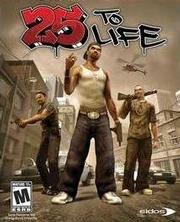 The cops in 25TL aren't just any cops. These law enforcers have psychic powers. Say, you should want to bust out a quick RAT-A-TAT-TAT around the corner. Guess what? These aces are already onto you before you make the move - unloading rounds at you with impeccable accuracy, regardless of the distance. These cops are killaz, yo!

Throughout the game you also get to play as a cop and a full-fledged gangster, and you'll play in locales ranging Tijuana to a ritzy casino. But every level feels the exact same just with you and the enemies boasting different skins. Every single mission boils down to a "kill everyone, move to the next room, kill everyone, move to the next area" monotony. The level design is neither modern nor sophisticated. But it's urban, yo!

Despite promising (if morbid) mechanics like human shields and stealthy grabs, they are all for not since the basic shooting mechanics are dysfunctional (a la 50 Cent Bulletproof). We're not talking sluggish aiming controls or even bad analog acceleration (about which anybody in earshot will hear me complain during many games); we're talking absolutely zero analog assistance and controls that are too sensitive no matter what setting you're on. This results in over-shooting your enemies over and over, making it an absolute chore to line up a shot. The only real way to generate consistent kills is to blindly charge at them with guns a-blazin'.

Riveting. And what's with the texture on the left trash can?

Most of the time enemy AI and your comrade AI simply pursue one M.O.: shoot in the general direction of the enemy. There is no regard for the environment or for the lives of friendlies or innocents. Don't step between an enemy and your shooting buddy, he'll do his best to shoot through you 99% of the time. That's okay, because they'll let you return the favor by walking in your line of fire all the time!

Aside from the soundtrack that features some notable classic hip-hop, the sound design is as deficient as the gameplay. Audio glitches abound. Dead people talk. Sound effects are truncated. The voice "acting" is worse than small-town scream theater. And let's not forget profanity for profanity's sake. There is rarely any relevant context for all the expletives other than trying to be "street." Embarrassing.

For the most part, the graphics are muddy, boxy and uninteresting. The texture work is very low-res and much of the modeling harkens back to the PS One days. Crates and other props are scattered across the levels at random with no logical purpose. Nothing really works aesthetically.

My tats and t-shirt prove that I'm "street."

There is a multiplayer component to extend the life of the game if you can forgive the super-wonky gameplay (which you won't). There is a basic "War" Deathmatch mode combined with a grab-the-loot mode loosely inspired by Counter-Strike. These along with a couple more standard modes can be taken online with 16 players, but I have no idea why you would put yourself through it.

At first, 25TL just seems silly. It quickly becomes frustrating and ends up as nothing short of a complete abortion of a game. It's nothing more than half-assed attempt to swindle $50 out of the URBAN gaming crowd. Don't be fooled, yo! The only plausible crime associated with this game is its existence on store shelves with a price tag.