This one goes out to the one I love

Technology has made it that much easier to deliver flowers or chocolates to a loved one on Valentine's Day - just a phone call or online credit card purchase away. But one of the most old-fashioned ways of expressing romantic feelings has seemingly been pushed aside: the love letter.

"It seems to me that when people are in love they write love letters," says Victor Contoski, a published poet and Kansas University professor of English.

"A love letter is something very personal. When you're writing something to be published, you're intending it for a much broader audience. On the other hand, if this is going to please whoever you are writing the poem to, what difference does it make if the critics don't like it?"

Contoski says he has personally indulged in writing love letters through the years. His wife was a native Pole, and he wrote her missives in Polish.

"Unfortunately, I don't have any of them," he says. "We moved several times, and they got lost in the moving. Incidentally, she thought Valentine's Day was very exotic. It was her favorite holiday. They had nothing like that in Poland." 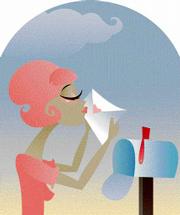 As far as technical advice to aspiring romantic writers, Contoski is succinct.

He says, "Just one tip: Follow your heart. What other criterion can there be?"

David Bergeron, Shakespeare expert and KU professor of English, agrees with the suggestion.

"Speak from the heart," he says. "There are not many ways to improve on that."

Bergeron says history is rife with examples of great love letters. He cites Heloise to Abelard as one of the most enduring. Heloise was a 10th-century French nun who was secretly married to philosopher Peter Abelard, her former tutor. Those by poet Robert Browning to his wife, Elizabeth Barrett Browning, also are considered classics.

"There's a book that Cathy N. Davidson of Duke University put together ('The Book of Love: Writers and their Love Letters') that was based on an anthology of love letters," he says. "What she set out to do was to show the distinction between how men and women write love letters. The unexpected and somewhat startling conclusion she came to was there wasn't any difference. People in love sound very much the same."

If one can't consult a real-life Cyrano to help craft a love letter, then the Internet is the next best way. A variety of sites offer approaches to the task.

At www.theromantic.com/LoveLetters/main.htm, the site has archived some of the most romantic letters in history. These range from Roman lawyer Gaius Plinius Caecilius Secundus (A.D. 100) to 20th-century U.S. presidents such as Woodrow Wilson. Some of the best benefit from historical hindsight, such as one from 1528 penned by King Henry VIII to Anne Boleyn - whom he would later behead because of her alleged adultery.

The site www.collectiveexperience.org/love/love.html offers an "ongoing, curated collection of anonymous love letters." Viewers are encouraged to submit their own to the collection.

The entries are just generic and heartfelt enough that they could easily be utilized to impress one's own sweetheart.

For those who need even more hand-holding, there is www.hugkiss.com/platinum/loveletter.html. It helps one put words, songs and pictures into an e-mail-friendly note just waiting to be sent.

The template feeds the writer an opening stanza (sample: "I have an overwhelming urge to ...") and from there guides one through a semi-serious combination of wooing possibilities.

It also can attach images such as a bouquet of hearts or "fluffy bunny snuggles," and offer melodies such as ELO's "Sweet Talkin' Woman" as an aural backdrop.

Actually, the lyrics from that song make for a pretty good love letter.