Why is this at retail?

Stole a minigame idea from: Caveman Games for NES

Titles that are essentially a collection of multiple minigames are generally a perfect fit for portable gaming systems. It's crucial that portable games can be picked up, played for 5-10 minutes (or sometimes even less), and then put down. Perfect for bus rides, waiting at the doctor's office, etc etc. This concept is what makes the WarioWare titles so endlessly entertaining. You can literally play it for 2 minutes and have a full gaming experience. It seems only natural that PSP owners would like a collection of solid minigames to call their own. Unfortunately, Ape Escape Academy is not that game.

This format on the PSP obviously poses a problem: the system needs time to load data off the disc, even if it's for a 15-second minigame. Being on cartridges, the WarioWare games had no trouble relentlessly throwing dozens of games at you with virtually no downtime. Not so with Ape Escape Academy, as you can expect load times before each and every game. Games are divided into different "years" of the Academy. Each year features a different teacher, who introduces a 3x3 tic-tac-toe grid filled with various games. This is essentially the "game selection" screen, and you graduate by completing rows of games on the grid. If you win the minigame, you receive a O. Likewise, losing the game will earn you an X. The first few years only require 1 row to be completed in order to graduate, but later levels have more difficult requirements. 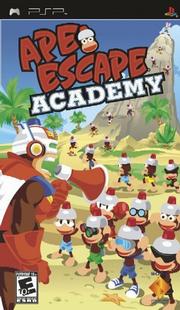 On paper, this sounds like it could work just fine. The problem lies with the quality of the minigames themselves. None are unique or innovative in any way, and I never wanted to play any of them more than once. Not only are they of poor quality, but they're often poorly explained. Take the golf minigame for example. The load screen tells you that the D-pad changes the direction of the shot, while the X button chooses shot power. Once loaded, you don't receive any more information. You can't see where the holes are, you can't control the camera, and you generally have no idea what you're supposed to do. Another game is a collection of trivia questions, and some of them are downright ridiculous. Why is the gamer expected to know what the national flag of Thailand or Poland looks like in order to complete a minigame? Considering that the Ape Escape games appeal to a younger crowd, it seems odd that such questions would be included.

All of the graphics, sound effects and music are virtually identical to the PSX and PS2 versions of Ape Escape. Considering it was never a very graphics-intensive title, this doesn't necessarily make for a good showpiece for Sony's portable. As always with these games, there are some truly grating and downright annoying character voices.

Ape Escape Academy would only be excusable as a free internet Flash game. Buying it at full-price for the PSP would be a horrible mistake, as it is extremely short. Replay value is almost out of the question, considering that it's not even entertaining on the first playthrough. Don't buy, don't rent:don't play.