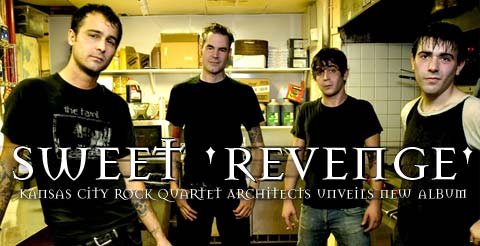 It's been 10 years since the brothers Phillips - Brandon, Zach and Adam - started a ska band and called it The Gadjits. A few albums later, the group reinvented itself as a sweaty American rock-and-soul revival show and inked a major-label deal that should have made them stars. A change in RCA label ownership, however, quickly squashed that dream.

lawrence.com: The first line on your new record is "Give blood make love is not a question." Care to explain?

So how old are you now?

Old. I'm a microsecond away from grey pubes.

It must be hard to wake up in the morning.

Not since I discovered Grecian formula. Now I try and conceal my age. I smear Vaseline on my face every night to conceal my wrinkles.

These are the kind of strategic moves that you learn after 10 years in the music business?

No, this is what I learned from watching the movie "Mommy Dearest."

I don't have kids yet, but I beat my dogs with hangars.

So back to music : Should we kill The Gadjits thing? Should we not even go there?

We can go there - it's part of the whole story. The Gadjits were adorable for a second there. I can't imagine that people actually liked our songs, but they definitely thought we were cute in our hats. Our enthusiasm, I'm sure, carried us a lot further than our talent.

Is it a goal to keep attracting major labels, having had a sort of disappointing experience?

That's kind of a "Desperate Housewives" approach to the music industry: "Oh, I'm 40 but I still want to be hot" : A wise old friend of mine told me, 'You make one record to get to the next record; you do one tour to get to the next tour.' So if RCA came back around and was like, 'Oh god, we were so wrong, we're so sorry' and really scraped and begged - if that's how I'm going to get to do my next record then that's what I'm going to do.

Why did you pick the title "Revenge"?

It's the omnipresent theme of my existence. If I'm driving with the radio off, what is most likely happening in my imagination is some kind of violent fantasy about exacting vengeance on somebody : It's usually like Genghis Khan cruel, like Vlad the Impaler cruel. That's just kind of how I stay a balanced person.

I don't recall any ballads on this record. Am I onto something?

Thank f*ck. I have finally reached the point where I am no longer deluding myself about anyone's eagerness to listen to me perform a ballad. I still write them and I make tapes of them and I send them to Christina Aguilera and Ashlee Simpson - the people who record ballads that America loves to hear : I think I'm doing the world a favor. I'm definitely doing me a favor, because I don't have to have that awkward moment of deciding onstage whether or not I'm going to ruin a perfectly good gig by attempting to slip a slow one in on people.

So you took a "bang it out quick" kind of mentality to this record? Does it have to do with more kids downloading crappily encoded music these days as opposed to buying your CD straight off the shelf?

No, that's just a rationalization that I can use to get it past record company people and producers. Throughout the entire history of The Gadjits we have never liked our final mixes. Our rough mixes, in our opinion, have always blown the final mix out of the water. So we've consistently strived to find a place where we can just release a record that's just "rough-mixed." By music-industry standards, rough mixes kick ass. They sound dirty; they sound gritty : I like to hear a band; I don't like to hear a bunch of technology and crap like that.

"exacting vengeance on somebody : It's usually like Genghis Khan cruel,"

You know if I were Brandon, I would be really pissed about the way this was transcribed, since the "..." actually explains the context of this statement (if you listen to the podcast), instead of making him look deranged.