Does the classic dungeon-crawler finally get a worthy update?

Some people have a hard time saying "thank you." Take the King in Midway's Gauntlet: Seven Sorrows for example. For centuries four immortal heroes have watched over his kingdom and how does he repay them? By crucifying them to a magic tree.

The beginning of Seven Sorrows finds the heroes freed from their arboreal prison. Their Kingdom has fallen into darkness and it's their job to seek out each of the King's six councilmen, all of whom have been transformed into Sorrows by the evil they have committed, and return peace to the land.

Silly plot aside Seven Sorrows' core gameplay hasn't changed much since the first Gauntlet game back in the NES days. Players choose from one of the four character classes (Warrior, Valkyrie, Elf or Wizard) and battle their way through scores of enemies inside booby-trapped dungeons. Generators still continually spawn new enemies and health is returned through various food items like cheese or turkey. 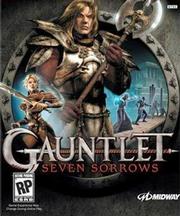 Each of the four character classes has their own strengths and weaknesses. The Warrior swings a big axe and has limited magic and projectile attacks, the Wizard is adept with magic and very physically weak, the Valkyrie is swift but has a short melee range and the Elf is fairly balanced.

The combat still lends itself to button-mashing and is therefore easy learn. It consists of slash, hack (which breaks blocks), launch and projectile buttons. No complicated combos here, at most you'll have to press a three-button sequence. Each character has four attacks that drain mana. They're mapped to the D-Pad. Lastly each character can release a mana blast that launches and blinds all enemies in the surrounding area.

Because of its low difficulty curve and the ridiculous amount of enemies you face at a given time, it's no surprise that the combat is Seven Sorrows best asset. The game is at its best when you connect on a power swing or mana attack and send a score of foes flying.

The best way to battle this monotony is by playing the game with more than one player, after all what better way to deal with mindless hack-and-slashing than by splitting up among four players? The difference between playing this game alone and with others is huge. It's clear that the developers had multiplayer in mind when they made this.

As for the levels: they all follow the same general pattern of fetching keys in order to gain access to a new area. Later levels become more maze-like, but the general design remains unchanged. Everything is so repetitive in Seven Sorrows that it's short completion time is actually a plus since it gets over fast enough that it still remains at least a minor distraction.

While the original Gauntlet and its sequel defined dungeon exploration all of its predecessors have been surpassed by the games they helped to inspire and Seven Sorrows is no different. While dedicated Gauntlet fans will be pleased with the amount of familiarity present, most will find the combat short-lived and the game's attempts at depth shallow. Worth a rent during this slow season, but not much else.

It's worth noting that the game is incredibly short compared to the last few Gauntlet games. 2 or 3 players playing co-op can run through the game is 3 or 4 hours. Anybody that remembers grinding through Gauntlet: Dark Legacy know how long that game was. It could take a few weeks to get through it all. Definately a fun rental to kill a night, but if you really want to buy a Gauntlet game, go pick up Dark Legacy on the sales rack for 10 bucks.