More titles than any other gaming series?: Quite possibly

The Mega Man series has gone through countless sequels and spinoffs for almost every system since the NES, but the original Mega Man X for the SNES is still considered to be near the top in terms of quality. If there was one title in the franchise that would be the best candidate for an update, it is certainly this one. Mega Man X Maverick Hunter for the PSP takes all the fantastic gameplay and bosses from the original, and coats everything in a brand new layer of paint.

Considering that the Mega Man X Collection was recently released, it seems like younger gamers should get plenty of chances to relive this great series. While that collection was put together with direct ports of the originals, Maverick Hunter mixes things up in much the same fashion as the GC Resident Evil and Metal Gear Solid: Twin Snakes. 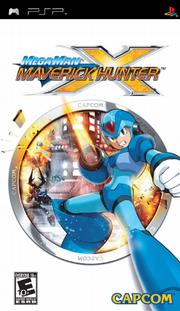 All of the gameplay is virtually identical to the SNES original. Mega Man can jump, dash, wall jump and shoot (as well as charge shots). As always with the series, he can earn new weapons by defeating bosses. Each time you defeat one, you gain the ability of the fallen Maverick. For instance, beating Flame Mammoth will let you equip the Fire Wave weapon. Defeating the bosses in the correct order is crucial, as each weapon can essentially be kryptonite for a specific Maverick. Chill Penguin may be difficult if you're trying to beat him with your standard blaster, but turning on Fire Wave will take him down in near seconds. It's near-perfect platform/action gameplay with few flaws.

The biggest (and best) upgrade is certainly the graphics. All of the levels are remade with fully polygonal backgrounds and enemies. The original art style on the SNES certainly holds appeal for those looking for nostalgia, but there's no denying that Maverick Hunter is far superior on the visual end of things. The only downside to the graphics is the occasional slowdown when there's too much happening onscreen. All of the music tracks have been redone as well, and most are on par or better than the originals. Sound effects are mostly comparable to the SNES version, only with more voice samples. This can get annoying at times, especially considering that Mega Man screams the name of each move when he performs it. It's easy to get tired of him screaming "Shotgun Ice!" if he says it 20 times in one boss fight. Between levels, you'll be treated to some poorly voice-acted (although well-directed) cutscenes. As an added bonus, there is an unlockable 24-minute anime that spends more time going into the story.

While it's a truly great game, it's hard to recommend purchasing it when you consider that the six-game Mega Man X Collection is the same price. Granted, this collection isn't available on the portable PSP, but it still contains far more gameplay than Maverick Hunter. Mega Man's archnemesis Vile (who looks almost identical to Boba Fett) is unlockable, and features a huge amount of new weapons. If this bonus (along with the graphics and anime video) is enough to entice you, then Maverick Hunter is worth the purchase. For casual Mega Man fans - as well as any fan of action-platforming - it would make for a superb rental.