I am Mike Birbiglia and I am a comedian. If you bring me to your school, I promise I will make you laugh and then eat at your local Applebee's. I enjoy the Riblets as well as the Fiesta Lime Chicken. I also like the Presidente Margarita and the Sizzling Apple Pie. In addition, I also enjoy the Bourbon Street Steak and the Nachos Nuevos.

At one point Mike Birbiglia organized a write-in campaign to get a dish on the menu of Applebee's named after him.

"The people had all these names like the Birbig Burger," the comedian says. "Applebee's actually e-mailed me and were like, 'Could you not have all these people e-mailing us?'"

The Kansas-based restaurant chain may reject Birbiglia's humor, but the college crowd has embraced it. The stand-up performer is currently on a three-month excursion that shuttles him from universities in New York to California. He's dubbed it the Medium Man on Campus Tour. 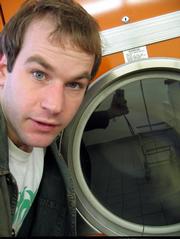 Comedian Mike Birbiglia will perform at 7 p.m. today at the Kansas Union Ballroom.

"I had to do some soul searching when I decided to do this college tour to figure out what am I in terms of these people in the audience," says Birbiglia, while driving from Chicago to Columbia, Mo.

During his four years at Georgetown University, Birbiglia came to the realization he would never be the big man on campus. But unlike a lot of comics, he wasn't even in the running to be class clown.

"The class clown was always this mean guy who would walk in the room and say, 'You're fat. You're gay,' he recalls. "I was always a little fat and a little gay."

Birbiglia (pronounced bir-big-li-a) will draw material from his just-released CD/DVD "Two Drink Mike" when performing in Lawrence. The CD was recorded during his stand-up show at The Improv in Washington, D.C. The DVD contains material from Birbiglia's Comedy Central programs "Premium Blend" and "Shorties Watchin' Shorties."

"I mostly talk about my life experiences, and I try and be as truthful as I can," the 27-year-old entertainer says. "People will come to me and ask, 'Which stuff is true?' I'm like, 'It's all true.' Granted, there are absurdities that I'll jump into from the truth. But the premises I'm discussing are real."

The constant TV appearances and touring have helped the New Yorker develop a sizable fan base. His supporters use the word "Birbiglian" to describe his clever turns of phrase that have found their way into the pop-culture lexicon - expressions such as "baldological clock" and "Olive Garden Italian."

One of the most popular features on his Web site (www.birbigs.com) is his ongoing blog, My Secret Public Journal, which allows him to advise and rant about all manner of subjects.

"That's how I view comedy: the making public of secret things," he says. "It's talking about things you probably wouldn't bring up at a dinner party the first time you meet somebody. You go out in front of audiences and take the plunge by telling strangers personal things about yourself. If they think you're funny, it's a success. If they don't, then it's very awkward."

While Birbiglia is starting to experience fewer awkward moments onstage, he admits these victories haven't extended to his personal life.

"People expect me to be funny offstage. I'm not very funny. I'm more awkward," he explains. "I can make awkward situations more awkward. Like I was moving a bed into my apartment. This woman who lived in the building opened the front door for me with her key. She said, 'I'm not worried because a rapist wouldn't have a bed like that.'

"What I should have said in response is nothing. But I said, 'You'd be surprised.'"

Q: What was your own college experience at Georgetown like?

A: "I always did well in writing classes - English was my major - but it was the requirements that really killed me. Like I took a computer science class. I showed up, and the guy was talking about a computer and what's inside them. I really didn't understand, so I just didn't go to class anymore. I failed the midterm. So I made a resolution to myself that I was going to study up and go to class. It was going to be like the '80s movie montage where Val Kilmer is hanging by his knees from a shower curtain rod and quizzing me with the book. But it never actually happened. I went to the class before the final to find out what was on the final and a guy said, 'Do you think we'll get back the final?' I go, 'We took the final?' So I sprinted into the computer science department and asked to speak to the professor, whose name I didn't even know. I said, 'Hi. I'm in your class. I missed the final because I misunderstood the syllabus.' He didn't even look up at me and he said, 'You get the worst grade.' I stood there awkwardly and said, 'So I get a zero?' He said, 'You get the grade that the person who did the worst got on the test.' I said, 'That's great news. Because that's what I would have gotten if I had taken the test.' Turns out the guy who did the worst passed the test. So I passed the test and I passed the class. It really made me proud to be an American."

Q: What is the worst show you've ever experienced?

A: "I've had so many strange venues I've performed in. I recently showed up at a college and they had me performing in the center of a Walk-a-Thon for cancer."