These black Americans have strong Kansas connections. Do you know who they are?

For more than a century after the slave trade brought Africans to American shores, the records of their lives survived only as long as the last person who could remember their family's stories.

Nothing written down - save registers of human sales transactions, or the personal journals of white slaveholders - only spoken.

This legacy of loss inspired Harvard scholar Carter G. Woodson, the son of former slaves, to dedicate his life to making sure that black history was documented and disseminated with accuracy.

In 1926, Woodson designated the second week of February Negro History Week. Hoping to draw attention to the contributions of black Americans, he chose that date in honor of the birthdays of black supporters Frederick Douglass and Abraham Lincoln. In 1976, the observance was extended to the entire month of February to allow time for celebratory programs and activities.

Since then, Americans have spent the month paying tribute to blacks from the past and those who, no doubt, will make history well into the future.

In that spirit, we've compiled a list of 20 notable black artists, scholars, athletes and pioneers who were born in Kansas, live and work here today or have strong ties to the state. See if you can match their accomplishments with their names. 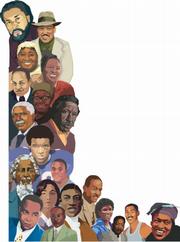 1. This opera singer, actress and Wichita State University alumna - who has performed in the Paris Opera, Cairo Opera, Carnegie Hall and on Broadway - does an impersonation of a fellow Wichita native (also on this list) who won an Oscar for her role as Mammy in "Gone with the Wind."

2. Perhaps best known for his storied 100-point game with the Philadelphia Warriors, this 7-foot, 1-inch NBA standout got his start with legendary coach Forrest "Phog" Allen at Kansas University.

3. Born in Lawrence in 1873, he partnered with fellow actor Bert Williams to form a vaudeville duo that took exception to minstrel shows featuring black-faced white comedians and wanted to fill the demand for black faces onstage with real black actors.

4. In his first autobiography, "The Big Sea," this Harlem Renaissance poet wrote of the time he spent in a Lawrence library as a boy: "Then it was that books began to happen to me, and I began to believe in nothing but books and the wonderful world in books where if people suffered, they suffered in beautiful language, not in monosyllables, as we did in Kansas."

5. The first time this Kansas University football player was handed the ball as a freshman during a scrimmage against the varsity squad, he ran 75 yards for a touchdown. He later played for the Chicago Bears.

6. A graduate of Kansas University, this songbird achieved stardom in the New York City theater scene and later married the founder of the Negro Associated Press.

7. "American Gothic," the most iconic photograph shot by this Fort Scott native - who also is an author, filmmaker and composer - features Mrs. Ella Watson, a black woman who had mopped floors for the government all her life, posed with a mop and broom in front of an American flag.

8. Born in Topeka in 1917, she became the first black person to receive a Pulitzer Prize for her book of poems, "Annie Allen." She penned the following rhythmic lines:

We real cool. We

9. Though not from Kansas, this author of "Their Eyes Were Watching God" - active in the 1930s and '40s - has been the ongoing scholarly interest of Kansas University Chancellor Robert Hemenway, a former English professor.

10. Although more closely associated with the rich Kansas City, Mo., jazz scene, this saxophonist was born on the Kansas side of the border. So great were his contributions to the form that Charles Mingus once said that if this musician - nicknamed Yardbird - were alive today, he would think he was living in a hall of mirrors.

11. Frustrated by failed attempts to help blacks acquire land in the South, this escaped slave moved to Cherokee County, Kansas, in 1873, followed by 300 black colonists. He is credited with bringing thousands of blacks to the state through the years.

12. This Wichita product and 1988 Heisman Trophy winner was the second-leading rusher of all time in the National Football League with 15,269 yards.

13. Born into slavery in Missouri, this pioneering agricultural scientist, who attended school in Fort Scott, invented new uses for crops, including making soybeans into plastic, turning sweet potatoes into cereal and creating more than 300 products - such as milk, coffee and shaving cream - using peanuts.

14. After traveling to China with jazz pianist Teddy Weatherford's band from 1934 to 1936, this Parsons-born trumpet player joined Count Basie's band until he was drafted to serve in World War II.

15. Born June 10, 1895, in Wichita, she is best known for her role as Mammy in "Gone with the Wind," for which she won an Oscar. She was the first black performer to win an Academy Award. Her most famous personal quote: "I'd rather play a maid than be one."

16. This Kansas University assistant professor of theater and film has written and directed television series, plays and movies; but he has rocketed to relative fame with this weekend's national release of his most ambitious effort, "C.S.A.: The Confederate States of America," a film that considers what it would be like if the South had won the Civil War. 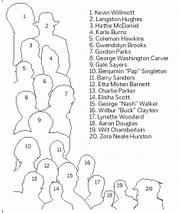 17. After four All-American seasons at Kansas University (1978-1981), this hardcourt star played for the 1984 U.S. Olympic team that won a gold medal and became the first female member of the Harlem Globetrotters in 1985.

18. This prominent jazz tenor saxophone player became interested in music early in life after attending concerts with his mother at a Topeka auditorium where she had season tickets. Though born in St. Joseph, Mo., in 1904, he attended Washburn University for about two years.

19. Art historian David Driskell dubbed this Topeka-born painter the "father of Black American Art." His African ancestry inspired his work, including a famous mural series, "Aspects of Negro Life," completed in 1934 for the 135th Street branch of the New York Public Library.

20. Raised in a modest Topeka household, he went on to earn a law degree from Washburn University in 1916 and, along with his two sons, helped prosecute at the local level the landmark case of Brown v. Topeka Board of Education.

1. The founder of the Nation of Islam was: a) Elijah Muhammad b) Elijah Wood c) Ralph Ellison.

2. Thurgood Marshall was: a) A prominent black thinker and architect of the Marshall Plan b) The first black Supreme Court justice c) A Harlem Renaissance writer

4. Which amendment to the Constitution guaranteed black people (and all citizens) equal protection under the law? a) The 15th b) The 26th c) The 14th

6. What landmark 1954 Supreme Court decision struck down the idea of "separate but equal" schools for black people and whites? a) Plessy v. Ferguson b) Brown v. The Board of Education of Topeka, Kan. c) University of California v. Bakke

7. The incarceration rates for black people in America have long been decried as a reflection of a biased justice system. At the end of 2000, what percentage of all black males in the United States ages 25 to 29 was in prison? (For comparison, the answer is 2.9 percent for all Hispanic males in that age group, and 1.1 percent for all white males.) a) 5.6 percent b) 9.7 percent c) 24.3 percent

9. U.N. Secretary-General Kofi Annan, the first secretary-general from sub-Saharan Africa, is from what country: a) Ghana b) South Africa c) Nigeria

10. When the United States' founding fathers wrote "all men are created equal," they meant black people, too.

11. In the "Tuskegee Experiment," the United States monitored 399 black men with syphilis for 40 years to see what would happen to them - even though the men were never told they had syphilis and a cure for the disease was discovered decades before the experiment ended.

12. The holiday Kwanzaa was created by black activist and scholar Maulana Karenga in 1966.

14. The historically black college Howard University is located in Atlanta.

ANSWERS: 1. A; 2. B; 3. C; 4. C; 5. A; 6. B; 7. B; 8. B; 9. A. 10. False. When this country was founded, blacks were not considered equal. In fact, the government counted each black as only three-fifths of a person. 11. True. Years after the experiment, modest cash payments were given to survivors and their families. And in 1997, President Bill Clinton issued a formal apology, saying the experiment was "racist" and "profoundly, morally wrong." 12. True. Karenga wanted to "give a black alternative to the existing holiday." At the center of Kwanzaa are its seven principles, which are represented by seven candles: umoja (unity), kujichagulia (self-determination), ujima (collective work and responsibility), ujaama (cooperative economics), nia (purpose), kuumba (creativity) and imani (faith). 13. True. 14. False. Howard University is located in Washington, D.C.