A robust Street Fighter solution for your game-lacking PSP 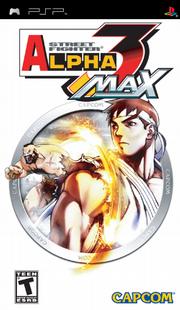 Anyone who has ever enjoyed a fighting game simply must respect the Street Fighter series. With Street Fighter II, Capcom essentially laid the groundwork for almost all one-on-one fighters in the future, and in the process became an all-time classic. The series went through many different incarnations, and the Alpha series was born in 1995. Three years later, Street Fighter Alpha 3 was released, and is still considered by many to be the best title in the series. Even after all these years, the gameplay is impeccable, and it's great to see it faithfully replicated on a portable.

SFA3: MAX includes a ridiculous amount of characters, including virtually everyone from SFII. The large majority of the special attack inputs have remained the same since the SNES version, so you'll be tossing fireballs and spin-kicking with Ryu even if you've never played the Alpha series. Super attacks can be performed after filling a meter in the lower-left. Inputs for these attacks are more complex, but aren't impossible by any means. Certain moves are hard to perform because of the PSP's controls. For instance, I had a large amount of trouble performing Ken and Ryu's "Shoryuken!" uppercut because of the PSP d-pad (the analog stick was no easier).

It's also awkward to perform moves that include the Strong Punch, as the L trigger can be cumbersome in the middle of a fight. Thankfully, there is a large amount of customization possible. You can even map special moves to individual buttons, and I found the Select button to be especially helpful in this regard. If you have trouble performing super attacks, you can simply map it to a button you rarely use, allowing you to unleash it with one button press.

There are multiple modes, most of which are worth trying out. Arcade Mode is the same thing fighting fans have experienced for years: working your way through a gauntlet of enemies, then defeating the final boss. There is also a mode that allows you to skip directly to M. Bison if you need practice (it's a ridiculously hard fight). I especially enjoyed Dramatic Battle mode, which allows you to pick an AI partner to fight alongside you. This doesn't resemble a tag-style fight, as your partner is fighting at the exact same time you are. World Tour mode features a lot of gameplay as you travel the globe, building up your character of choice.

I've always been a fan of the visual style of Street Fighter, and Alpha 3 MAX might be the best in this regard. Characters are well-drawn and interesting, and the special moves look dramatic. When you finish a round with a super attack, the entire screen gets washed over with what looks like a green wave of energy. It's a highly rewarding way to end a fight, and it looks great. All of the voices, music, and sound effects have been ported perfectly as well.

While it may include a few annoyances in the control department, it's not enough to bring this great fighter down. The sheer amount of modes and characters ensures that you'll be playing this game for a while. Without a doubt, it's the best fighter on the PSP, and well worth a purchase for fans of the series.