How does the revamped original fare on the dual screen?

Bad: Clunky controls, length, item-fetching gets tiresome, inventory system, it's not RE4

Hope this is not: CHRIS'S BLOOD!!!

Back in 1996, a new genre was introduced to the gaming world. With the release of the original Resident Evil, the words "survival horror" forever entered the gaming lexicon. Silent Hill, Clock Tower, Dino Crisis and countless others tried to recreate the atmosphere of fear that RE produced, but none have achieved the commercial success or fear factor of the originator. Every gamer remembers nearly soiling themselves when those dogs jumped through the window, and now they can relive it all on Nintendo's portable.

Resident Evil: Deadly Silence isn't a direct port, it offers a brand new "Rebirth Mode" that incorporates some touchscreen and microphone minigames and puzzles. Almost all of the puzzles incorporate the stylus, and most of them are well-designed. The most frequent use of the touchscreen is the new "Master of Knifing" minigame. Upon entering some rooms, the view will switch to first-person. Zombies, dogs and hunters will approach you, and you must tap the screen to stab or slice them. It's actually a very frustrating and unnecessary minigame, as it's almost impossible to avoid taking damage during many of these instances. Not only is it frustrating, it also makes no sense at all. If I'm carrying a bazooka, a shotgun and a handgun, then why do I have to wait for the zombie to slowly amble towards me from across the room when I could obviously just shoot him? The microphone is used less often, but is occasionally utilized in specific situations (giving a team member CPR, blowing back zombie vomit, etc.). 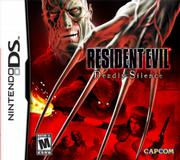 My personal favorite improvement over the original is the absence of load times. On the PSX, you had to watch the "opening door" animation every single time you went to a different room. Thanks to the cartridge format, load times are eliminated, and this animation can now be completely skipped. This really does improve the pacing of the game, especially considering it requires so much backtracking.

Basic objectives are the same, and usually involve getting item X to unlock a certain door. It grows tiresome quickly, and the inventory system makes it even worse. My main complaint with the original is the fact that you can only hold 6 or 8 items, depending on your character. Considering that you almost always need a weapon, ammo, a health item and a key, that brings your free space down to 2 or 4 slots. 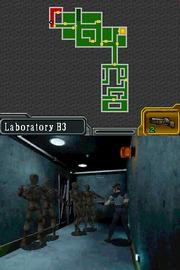 The game constantly presents you with new items, ink ribbons and various ammo, so you run out of space very quickly. Frequent trips to the storage chest are an unnecessary annoyance that should have been fixed with this DS version.

A hugely memorable aspect of the original was the awful voice acting and dialogue (not to mention the priceless opening cutscene). I couldn't be happier that they kept the same voices, as I consider them to be all-time classics in terms of pure, unadulterated cheese. The delivery on lines like "Maybe it's::.Chris!" and "It might be handy if you, the master of unlocking, take it with you" is absolutely hilarious.

While the voices are horrible, the music and sound effects are right on the money. The mansion music is perfect for setting the creepy mood, and all of the zombies and enemies sound appropriately grotesque. On the graphical end of things, it actually looks a bit sharper than the PSX version in most regards. On the smaller screen, it's harder to spot shining item pickups, but it's a minor issue.

It may be a far cry from the brilliance of Resident Evil 4, but RE:DS should remind gamers of the series' roots. It's still terrifying at times, and you can play Classic Mode if the touchscreen functions annoy you. It's still just as short as ever (beatable in under 3 hours), but it makes for a good rental for road trips or weekend diversions.