Experts worry that focus on obesity could lead to more anorexia, bulimia

Lara Izokaitis first got the idea from a television special she watched in her ninth-grade health class: She could purge her food as a way to stay thin.

That way, she could be more like the actresses she saw on TV, look good in her skimpy volleyball uniform and maybe, someday, pursue a modeling career.

The show was meant to warn students of the dangers of eating disorders. But the night Izokaitis saw it, she went home and, for the first time, made herself vomit.

It was the beginning of a more than two-year battle with bulimia.

"I was bombarded with society's standards," says Izokaitis, a Lawrence resident and former Kansas University volleyball player who graduated in 1997. "It was a door that was opened to a very dark place within my soul."

Today is the beginning of National Eating Disorder Awareness Week, and those who study eating disorders say they're as prevalent as ever in Lawrence and across the country.

But as the media and society set their sights on ending the country's obesity epidemic, there's a new fear: Could such a focus on the dangers of being overweight, without offering proper solutions to the problem, lead even more people to anorexia and bulimia?

"There's greater fear about weight gain," says Ed Bloch, an eating disorder treatment specialist who co-directs the Life Enrichment Center, 5200 Bob Billings Parkway. "For me, if I have a cut on my arm, staring at it doesn't make it heal, and picking at it only makes it worse. That's the way we deal with weight issues in this society. We stare and pick at it."

According to the National Eating Disorders Assn., 10 million American women and 1 million American men are battling eating disorders. Those disorders include anorexia, which is self-starvation, and bulimia, which commonly is referred to as the cycle of bingeing and purging. 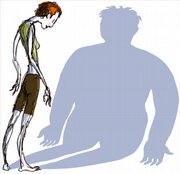 Meanwhile, nearly 35 million women and 27 million men are obese, according to the National Institutes of Health.

Ann Chapman, dietitian at KU's Watkins Health Center, is among those worried that a decrease in obese adults could lead to an increase in those with eating disorders.

She says the basics about proper diet and physical activity must be instilled in children early so they don't resort to extreme methods of losing weight.

"Parents are primary role models," she says. "If the mother is doing a : bizarre diet, it's really difficult to expect the child to avoid unhealthy eating practices."

Schools, Chapman says, also have a key role in the education process.

Bloch, who has worked with patients with eating disorders for 17 years, says he's seeing some disturbing trends.

First, he's encountering more patients who suffer from both bulimia and anorexia, alternating between the two.

And he's seeing more patients at the age extremes - as young as 10 and others who first exhibit the behaviors in their 40s or 50s.

But the most common patients are still girls between the ages of 14 and 28.

"Young girls have a higher level of stressors - they have higher expectations academically and athletically, social pressures, and all of those stressors involve a drive for success," he explains. "They think perfectionistic kinds of thoughts. They might be over-involved, and there's no down time for them. They're driving themselves all the time."

And body image becomes another one of those areas for perfection.

In college, Chapman says, the stresses intensify - or at the very least, change.

"I see a lot of women who develop an eating disorder in high school, but some start in college," she says. "The transition to college is huge in terms of the emotional toll it takes, even if you're excited. Even if it's good stress, it's a stress."

Pam McDermott also is among those concerned about how the war on obesity might lead young people - particularly girls - to the wrong conclusions.

McDermott, wife of John McDermott, pastor at Morning Star Church, 998 N. 1171 Road, is co-organizer with Izokaitis of Straight-Up Beautiful, a conference at the church expected to draw 150 teenage girls April 7-8.

"I think you have to be careful how you frame that when you're talking to 14-year-old girls," McDermott says of obesity discussions. "It can be an all-consuming thing."

The conference focuses on the fact that paper-thin models and actresses seen in magazines, on TV and in movies aren't the only ones who are beautiful. Beauty, McDermott says, comes from within.

Izokaitis, who went on to model in New York for several years, wishes that was a message she had heard when she was in high school. She says eating disorders are just a symptom of deep-rooted psychological issues that come down to a lack of self-worth.

"I know the idea that food can feed the soul," she says. "Really, it's showing the emptiness of the soul."