Sorry, but our plumber is in another castle.

Wait. Mario is captured? Princess Peach finally gets her chance to return the multitude of favors to her pudgy Italian plumber significant other? You bet. And Peach's first outing as a protagonist is a fun, if too easy, affair.

Out of the gate, Peach is equipped with a lot of attack options. Sure she can jump, slide and climb and whatnot, but she has an umbrella named Perry that she can use to swing, scoop and throw enemies. The feeling of batting Goombas and Koopas with the umbrella rekindles feelings of the age old Trojan or Golden Axe days.

Peach also has four Vibes at her disposal. At any time she can activate any one of these using the touch screen. There is Joy that allows her to float upward and perform cyclones which is useful to traverse hard to reach platforms. Rage turns her into a flaming wonder that weighs a ton which comes in handy when there are wood or large obstructions that need to be destroyed. Gloom turns Peach into a crying fountain and a sprinter useful for running across treacherous ground and filling up anything with water. Finally, the Calm vibe simply restores your health. 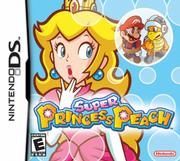 Aside from Calm, each Vibe is crucial in passing levels successfully. One of the main objectives is to find the three captive Toads in each level. Doing so requires figuring out the oh-so-easy environmental puzzles. There is too much help along the way with regard to text or just plain environmental context that practically gives you the answer before you even try to figure out things on your own. It's a pity, too, because many of the puzzles scream classic Nintendo goodness, only to be slightly spoiled by the lack of difficulty.

You have a meter that drains every time you use Vibes, but refilling it couldn't be easier. You can use Perry to swallow enemies to regain the meter or just find the refills along the way. No matter what, you will never be confronted with a puzzle without having a plethora of ways to refill the meter.

What makes the game even easier is the store in between levels where you can upgrade Peach's attacks and overall health. The enemy difficulty doesn't seem to increase along side Peach, so it really is a walk in the park. That being said, the main game still manages to check in at just over ten hours. That's quite an accomplishment, actually. 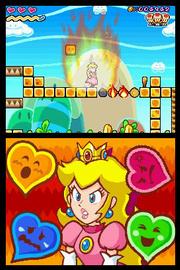 Now, the touch screen elements are completely unnecessary. Most of the touching simply involves the choosing of her Vibes. This could've been easily moved to an L+R toggle method. Also, there is a mini-game type sequence before each boss that requires the use of the stylus. While some of them are fun, they don't fit in the overall design and really seem tacked on as a paltry attempt to justify proprietary DS usage. All those GBA-only owners are missing out for no good reason.

Super Princess Peach is littered with new renderings of classic characters in sprite form. While many pooh-pooh the use of sprites in this day and age, the art style works for the game and does an admirable job for the heroine's first outing. The sound is equally commendable, offering what you'd expect out of Nintendo, although nothing will floor you about the audio presentation.

SPP controls tight and intuitively and is very enjoyable for the old-school 2D platforming crowd. The lack of difficulty and overly-cutesy presentation may be an effort to attract a younger female element, but it leaves you with a feeling that the game really could've been stellar if it provided more of a challenge. Still, this is a quality Nintendo title and most developers would kill to produce a product of this caliber.