Eleven-year-old Chesney Buck has moved into her own "little haven."

After sharing a room with her 7-year-old sister, Sylvie Mitchell, Chesney said she was happy to have her own space where she could study, read, listen to music, hang out with friends and, most importantly, enjoy some peace and quiet.

Her mother, Fadra Mitchell, and stepfather, Cotter Mitchell, helped transform a room - which Chesney and her mom described as needing some serious work - into an oceanside oasis. The walls are "swimming pool" blue, and the floor has been painted an orangish-brown color similar to sand. Splashes of the blue are carried throughout the room.

Luckily for Chesney, Cotter Mitchell is an artist by trade. He helped create "Freeform," a sculpture at Sixth and Massachusetts streets, to commemorate Lawrence's 150th birthday.

"We honk every time we drive by it," Chesney said as she touted her stepfather's artistic talents, which are evident throughout the room that she moved into in late fall.

He tore out the closet area to create a space for her bed and an overhanging dimmer light, which Chesney said was perfect for reading. He also made shelves that go around most of her room. She uses the extra space to display her books, artwork and collectibles. Cotter Mitchell took the top part of bowling trophies - not his - and placed them upside down on the bottom side of the shelves. They now serve as hooks for Chesney's hats, clothes and other things.

He also made six bubble-shaped bulletin boards of varying sizes. They go with her ocean theme because "they're like the bubbles that come up when someone is breathing in the ocean," she said.

Her parents restored a set of lockers and desk.

"Even though I am not in regular junior high, I still get the locker experience," said Chesney, who is home-schooled. "The lockers serve as my closet and help keep the room organized."

Cotter Mitchell found what Chesney calls "her cheesy zodiac medallion" at the Salvation Army. He paid $2 for the medallion that serves as a headboard. Chesney says the artwork's details reflect her personality.

Chesney has found alternative uses for a couple of items in her room. A curtain has become her bedspread, and an upside-down wastebasket serves as a nightstand. Both work well with her color scheme.

Fadra Mitchell said the transformation, which included a lot of ceiling work, cost less than $500.

And Chesney couldn't be happier.

"This is the best room in the house," she said of her first-floor bedroom that is near the kitchen and dining room. "I like to leave it open so when people walk in they see something bright."

She seems to be quite shy, but her room speaks volumes.

By entering 12-year-old Tasman Grout's bedroom, you can tell she is creative, enjoying drawing, making artwork and reading.

Not too many kids - like Tasman - accessorize their rooms by hanging ornaments and knickknacks from the ceiling. Instead of looking at a bare ceiling, she sees ornaments of all shapes, sizes and colors. Her favorite is a beaded turquoise one that looks like an oversized earring. She also has two chocolate Christmas angels looking over her.

Tasman said they are about 2 years old. Will she eventually eat them?

"No way," she said. "They are probably disgusting."

Tasman also pointed out a gift tag that she hung. On the back, it reads: Merry Christmas, Tasman, Love Aunt Becki. The tag also is an angel.

She has adorned her ceiling and walls with dolphins, her favorite animal. She has small, neon-colored versions of the fish tacked onto her ceiling and brightly-colored posters that hang on her walls. She even has a stuffed one on her bed.

Besides dolphins, she likes to display her artwork. Among her pieces: a picture of a castle that she drew and colored, a paper plate on which she painted a moon and star, and a nightstand that she painted purple. 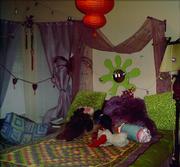 Second place in the Rooms that rock contest.

"She is only 12 and already has had three different bedroom sets," she said. "It's what she always wants for birthdays and Christmas."

Tasman's latest transformation began Oct. 8, which was her birthday. She picked out two neon green pillows and a purple pillow at Kohl's department store. They served as the basis for her color scheme.

Her mom bought some funky-looking lights that Tasman hung around her windows and bed. Her neighbor, Liese Mead, made a green-and-purple quilt for her bed.

Tasman and her mom also like a good bargain. They have made curtains out of blankets and cleaned up a unique wooden lamp that was left curbside by one of their neighbors. Her mom said they planned to make new curtains to match the purple one that is draped over her bed.

Tasman, who has been in the same room since age 5, says she doesn't have plans to change her room anytime soon, especially since she has a new friend to share it with.

Last week, she adopted a puppy that seemed right at home curled up on her bed.

The troops took 8-year-old Bradley Lechtenberg's bedroom by storm and turned it into a galaxy like no other.

Bradley's favorite feature was the wall that his dad painted for him. Drew Lechtenberg, who has custom-painted cars and motorcycles, said he began by making a sketch, then drawing it on the wall and painting it. He said the painting, which includes space ships and planets, took about a week to complete.

"My dad painted it all by himself," Bradley said.

His father also built and painted a couple of spaceship models that he hung from the ceiling. Bradley liked them so much that he wanted to try it.

"He found out that you could actually build a model and paint it, so he was real excited about that. So, I gave him one of those for Christmas," his dad said.

Now it graces the ceiling as well.

Drew Lechtenberg and McClure also shopped for fabric that had the "Star Wars" theme on it. They found material for the curtains, which McClure made, at Hobby Lobby. They ordered a comforter set and pillows online. McClure said she was working on a "Star Wars" cover for his black futon.

He also has three shelves of "Star Wars" action figures and toys. Bradley pointed out his favorite character, General Grievous, and a Star Wars Lego ship that he had pieced together. Bradley and his dad also got out two light sabers and gave a little performance.

The dad-son duo built a new bed for the room because Bradley's previous one wasn't sturdy enough.

"We (had) put the bed on risers so he could put his toys in storage underneath it. And first thing, he goes and jumps on it and he goes flying face first," McClure said.

Then his sister Natasha, 11, did the same thing, Drew Lechtenberg said. So Bradley decided the old bed was unsafe and wanted a new one.

The new bed is so sturdy that he can jump on it, and it is smaller, which allows room for his alternative sleeping place - a two-person "Star Wars" tent.

McClure said Bradley used to be kind of afraid to sleep in his room. But since the makeover, he doesn't want to sleep anywhere else.

Natasha made a sign to hang on Bradley's bedroom doorknob as a birthday gift. It seems quite fitting: "Knock first. I am having fun."