The 84-minute movie, portions of which were filmed in Lawrence, is slated for upcoming preview screenings at Harvard University and other prestigious venues.

The movie explores the science controversy in Kansas and Dover, Pa., which pitted mainstream scientists against proponents of intelligent design. It focuses on tactics and which side is winning or losing the public relations battle.

Randy Olson, the former Kansas University student, marine biologist and filmmaker behind the documentary, said Tuesday that mainstream science was losing the fight for public opinion because most scientists aren't adept at public relations.

"'Flock of Dodos' revolves around the dodo as a metaphor," Olson said of his film. "When an environment changes, you run the risk of extinction if you don't change. The media environment of our country has changed, and the conservatives have figured that out. Scientists have not done a good job of figuring that out and they are running the risk of going the way of the dodo." 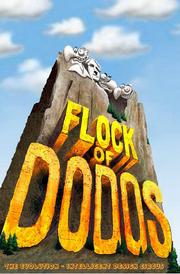 "Flock of Dodos," a film by former Kansas University student Randy Olson, shows how tactics employed by intelligent design proponents make the concept attractive to people. The documentary will premiere next month in Overland Park.

Olson said evolution is the foundation of his own scientific knowledge but that he doesn't take sides in the documentary, instead showing how tactics employed by intelligent design proponents make the concept attractive to people.

"It's academics, it's environmentalists - they don't understand the fact that we live in a society where the facts alone are not sufficient," he said. "Science absolutely requires two elements - you do the science and then you communicate it. Science really neglects the communications side."

Much of the film covers the controversy over public school science standards in Kansas.

Last year, the State Board of Education approved science standards sought by supporters of intelligent design, which open evolution to criticism although mainstream scientists say the theory is growing stronger each year thanks to new evidence supporting it.

The education board held hearings in May that drew international attention and showcased intelligent design.

A trailer for "Flock of Dodos" and information on the documentary can be seen at www.flockofdodos.com.

The film will have its first public screening at 7 p.m. Feb. 2 at the Glenwood Arts Theater, at 95th Street and Metcalf Avenue in Overland Park. A panel discussion with supporters of both evolution and intelligent design will follow.

Steve Case, a Kansas University scientist who led a committee that wrote pro-evolution science standards that were later rejected by the education board, appears in Olson's documentary.

"I doubt if it is one way or the other in its point of view," Case said of the film. Olson "is tending to explore why each side doesn't get it, and why we can't hear each other talk."

Case said it was probably true that it is scientists who have failed in the public relations battle.

"The Discovery Institute (which backs intelligent design) has hired a marketing firm. There isn't an equivalent for science," Case said.

Olson filmed portions of the documentary in Lawrence, including an interview with an intelligent design supporter at The Wheel, 507 W. 14th St.

Olson graduated from Shawnee Mission Northwest High School and then attended KU several years before going to Harvard to get his doctorate as an evolutionary ecologist. He later attended University of Southern California to become a filmmaker, and has worked with top Hollywood actors in short comic films.

He said despite the name of his new documentary, he's not trying to poke fun at his native state, but said Kansas has a negative reputation because of the fights over science.

"Over the past 10 years, something has happened that has given Kansas a national image that saddens me. Somebody failed to consider the larger aspects of public relations in this," he said.