Recommended if: You've ever enjoyed a turn-based RPG

Square's juggernaut Final Fantasy series has spanned numerous generations of consoles, and now arrives as a late entry in the GBA's lifespan. The transition to a portable is handled extremely well, and the gameplay holds up even after all these years. If you've ever enjoyed a turn-based RPG, you're bound to love Final Fantasy IV Advance.

Released as Final Fantasy II in the states (for the Super Nintendo), the game tells the story of Cecil, a dark knight. Very early in the story, you learn that he's very skeptical of his orders from the king, and questions the morality of what he's doing. You'll play as a dark knight for the first several hours of the game before undergoing a dramatic transformation into a Paladin. In these early hours of gameplay, your party will change very often. It's actually quite frustrating at first, considering you spend time levelling these characters up, only to have them die or leave the party in some other fashion. Fortunately, the game becomes more consistent in terms of party members once you turn into a Paladin. My personal favorite was Sage Tellah, an experienced user of magic. Two other good characters are the twin mages, Palom and Porom (one black mage, one white mage). 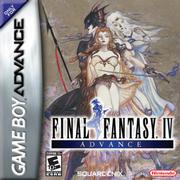 Battles occur at an alarming rate, and there are areas where you'll be lucky to take 4 steps before being plunged into another skirmish. This is all well and good, but certain environments tend to throw the same four enemies at you time and time again. Regardless, this is good for levelling up, and you can always run from the battle (although sometimes with a Gil penalty). All of the Final Fantasy mainstays are present (Curaga, Thundaga, Firaga, Phoenix Downs, etc), and you'll find yourself using them very often. In fact, playing this game made me realize that the core Final Fantasy battle mechanics really haven't changed much at all over the years. You'll be doing the same tactics in this game that you would in Final Fantasy X. There is certainly no shortage of equipment or weapons in the game, and they can be bought, found, or won after defeating enemies.

Some boss fights are confusing or downright difficult. I don't want to include any obvious spoilers, but certain fights require you to do things you'd never even think about in order to win. I'm not talking about using Thunder when a water barrier goes up or anything that obvious, I'm talking about needing to do things as drastic as dying just to win the fight. This can be frustrating if you realize this after using up multiple potions, ethers, and other items. I'm mostly nitpicking here, however, as the large majority of the boss battles are highly enjoyable and feature an appropriate difficulty.

I've always been fond of SNES graphics, and almost all of the games from that era transfer beautifully to the GBA. The Mario series and Link to the Past were recreated perfectly for the portable, and FFIV is no different. Colors are bright and vivid, character portraits look good, and the Mode 7 overworld graphics are still visually appealing (especially when in the airship). The music is just as perfect and fitting as any seen in the rest of the series. Sound effects are somewhat sparse, but they all sound great, especially when coming out of the DS speakers.

SquareEnix included a couple extras, as well. There is a new Bestiary option, a Quicksave ability, and an entirely new dungeon at the end. With it's rewarding gameplay and intriguing story, FFIV Advance should appeal to longtime RPG fans as well as those new to the series (or even turn-based games as a whole).