Another ace for the sports/RPG hybrid

Bad: Too much talking

Why: Is it so much fun to hit someone with the ball?

The Game Boy Advance has seen its fair share of bad console translations but thankfully Camelot has been there to save the Mario sports series. They masterfully recreated the Mario Golf on Game Boy and now have done the same with Mario Tennis Power Tour.

Mario Tennis Power Tour thrusts the player into the shoes of a new student at the Tennis Academy. This Academy is searching for its next great tennis player who will win the Island Open, and the objective is to be that player. This is accomplished through a progression of different training mini games, challenge matches with better players, and upgrading the character. This upgrading is presented as a simplified RPG element that allows for the player to accumulate points through the matches and training that are then spent on different attributes like speed, control, and many others. This allows the player to create their very own master tennis player. The biggest downside of the story is that there is too much dialogue for a sports game. 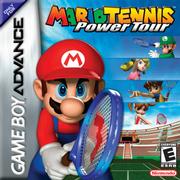 Yet even with all this customization available, the most interesting aspect is the ability to play in doubles or singles matches. In singles you, obviously, play by yourself but are able to distribute the point rewards to your doubles partner for upgrades. This becomes important when the awarded points become too little to cover both of the characters in doubles. Speaking of doubles, Camelot did an amazing job of balancing the game in this respect. These matches are difficult and will force the player to maximize the computer's makes, which do not happen often. These doubles matches require much more skill than the singles. The singles matches are not necessarily easy, but they do become extremely repetitive and too dependent on the Power Shot skills. Thankfully though, these skills can be turned off and then strategy becomes even more important. Throw in easy to master controls and it all becomes second nature.

Though this game is on an aging handheld it still presents bright vivid colors and entertaining music. All of the different opponents have a distinct look and style of play that helps prevent boredom and the animations for the Power Shot moves can be quite entertaining, if not extremely over the top. Though the music is top notch for the Game Boy, the other background sound effects are repetitive and the sound used for speaking is extremely grating and could have been left out.

In all, Mario Tennis Power Tour offers up a great option for the handheld sports fan it provides solid tennis action, bunches of entertaining mini-games, unlockable characters, singles or doubles matches and even supports multiplayer matches.