"Humor can be dissected as a frog can, but the thing dies in the process, and the innards are discouraging to any but the pure scientific mind."

The formula for funny.

Comics strive for it. Authors tweak their copy, searching for it. TV networks bank on it.

And yet, no matter how many times the chicken crosses the road, a rabbi walks into a bar or a buffoon slips on a banana peel, the formula may never be found.

"You think about it, but it's not necessarily like a recipe - you do this and you fabricate comedy," says Dan Spurgin, a Lawrence resident and member of the improv comedy troupe Hypothetical Seven.

Most people agree that humor is a good thing, even if determining its definition is something like nailing JELL-O to a tree.

Comedy can lighten tense situations and provide entertainment. Laughter even can provide health benefits, such as lowering blood pressure and exercising abdominal muscles.

The TBS television network has run ads featuring its fictitious "Department of Humor Analysis," which is dedicated to the "comprehensive study of humor and humorousness." It even has a Web site with a mock quiz to determine what people think is funny. 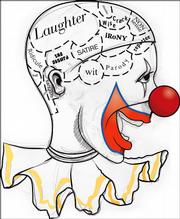 That's fiction. Lawrence Mintz has the job in real life.

Mintz is director of the Art Gliner Center for Humor Studies at the University of Maryland.

Yes, he admits, the first question most people ask him is, "You're a college professor who studies WHAT?" But with humor permeating nearly every aspect of life - family, sex, politics, race, religion and so on - he says it's a legitimate field of study.

The elements of humor are a complex mix of linguistics, anthropology, biology, economics and geography, Mintz says.

He says most societies have both "sophisticated humor and lowbrow humor - fart jokes and so on." Certain types of jokes, he says, are found almost universally - say, poking fun of those in authority, or making jokes about in-laws.

Physical humor also is nearly universal. When we see a man get hit in the groin on "America's Funniest Home Videos," we both laugh at his misfortune and have relief that he'll recover, Mintz says. Something similar holds true for the Three Stooges and professional wrestling.

Often, it's incongruity that tickles our funny bone.

Jim Carothers, a Kansas University English professor who teaches an occasional course about American humor, says most jokes involve things that don't quite fit together - for instance, a serious person stuck in a silly situation.

"In any given situation, the humorous character is marked as different," Carothers says. "It may be because of some physical action, a manner of dress, a manner of speech. Or it may come from language."

Or it could mean a response that is different from what is expected. Consider this joke, deemed by British scientists in 2002 to be the funniest cross-cultural joke in the world, based on their research:

Two hunters are out in the woods when one of them collapses. He doesn't seem to be breathing, and his eyes are glazed. The other guy takes out his phone and calls the emergency services.

He gasps: "My friend is dead! What can I do?" The operator says: "Calm down, I can help. First, let's make sure he's dead." There is a silence, then a gunshot is heard. Back on the phone, the guy says: "OK, now what?"

Humor, say those who study it and write it, evolves over time.

Will Averill, who writes for the local comedy revue "Victor Continental," says he sees a trend toward over-the-top potty humor.

"It's no-holds-barred comedy," says Averill, who lives in England. "Modern comedies pretty much top each other as far as where they can take it. It's great comedy, but it's harder to make people laugh."

Mintz, the Center for Humor Studies director, says he thinks comedy is getting crueler and more divisive over time - especially between political and class lines.

And Carothers, the KU professor, worries that technology will kill the art of joke-telling.

"I'm absolutely convinced that we are losing the art of spoken humor, that the Internet is killing it," he says. "The stuff that comes over the Internet is usually crude - crudely written, I don't necessarily mean it involves crude language. You don't hear people telling humorous stories like they used to."

But Spurgin, the improv comedy troupe member, says he thinks all forms of humor will survive if people can relate to them. Comedy, he says, is a way of dealing with issues that are typically taboo in public.

"You get to pause and say, 'Hey, that also happens to me,'" Spurgin says. "Humor, at its best, takes you out of the isolation of your life."

Got a favorite joke?

Post it on the "comments" section below this story.

Only PG-13 jokes or tamer jokes, please. Dirty jokes will be removed by the site staff.