Kansas has produced its fair share of movers & shakers

Maybe it's the sunflowers, or perhaps there's something in the water. Or is it because the summers are too hot, the winters too cold?

Kansas, it seems, has more than its share of noteworthy characters.

Twenty-seven of these folks are featured in "John Brown to Bob Dole: Movers and Shakers in Kansas History," a collection of biographical essays now in area bookstores - just in time for Kansas Day, Jan. 29.

Jonathan Earle, an associate professor of history at Kansas University, has read most of the profiles.

The collection, he said, "kind of reaffirms a conclusion I reached shortly after I moved to Kansas: This state does produce a lot of quirky, interesting characters."

Earle, who was named one of the nation's top young historians by the History News Network last month, contributed the essay on abolitionist John Brown.

Kansas historian Virgil Dean has edited a collection of mini-biographies of Kansans who made a difference to the nation and whose lives reveal much about the past. The book, "John Brown to Bob Dole: Movers and Shakers in Kansas History," is published by University Press of Kansas.

¢ Dr. Samuel J. Crumbine, whose public health crusades led to the invention of the fly swatter.

"He was a guy who had the right idea at the right time and who was in the right place to make it happen," said Jim Hoy, an English professor and director of the Center for Great Plains Studies at Emporia State University. He wrote the essay on McCoy. 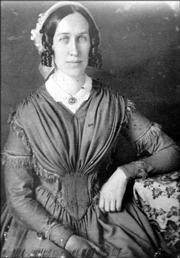 Hoy, too, was struck by the number of Kansans who spent time on the national stage.

Narrowing the list of high achievers to 27 wasn't easy.

"We wanted to cover 150 years of Kansas history in a way that would be fairly representative of a lot of different areas - not just politics," said the book's editor, Virgil Dean, who lives in Lawrence.

Some of the state's better-known icons - Carrie Nation, Amelia Earhart, Langston Hughes and Dr. John "Goat Gland" Brinkley - did not make the cut.

"That was a tough decision. She was hard to leave out," said Dean, who's also editor of the Kansas State Historical Society's quarterly journal, Kansas History.

Dean said if University Press of Kansas decides to print a second collection of essays, it likely would include Kassebaum.

Part of the challenge, he said, was finding writers who had the time to research their subjects and who were interested in contributing essays.

Eleven of the 27 contributors are on the KU faculty.

Brian Moline, an attorney and chairman of the Kansas Corporation Commission, profiled Vern Miller, who as attorney general gained notoriety in Lawrence for jumping out of car trunks during drug busts. Miller also attracted national attention when he forbid airlines from serving liquor on flights over Kansas.

"He did a lot of crazy things," Moline said. "But he was so relentless in equally enforcing the laws that were on the books, he ended up dragging Kansas into the 20th century."