The first online fighter for the 360 has plenty of jiggles...but can it fight?

After a torrent of delays, Dead or Alive 4 has finally hit retail shelves. It's the first fighter for the 360 and luckily it's a very worthy one if you happen to subscribe to Xbox Live Gold. New players shouldn't have much trouble learning the fighting engine and experienced players can look forward to climbing the online ranks. With around 60,000 current players online, there's always an opponent and DOA4 features the best online mode of any console fighter I've ever played.

Dead or Alive is a strictly hand-to-hand series, which means you won't see any flashy Soul Calibur-esque fights here. This can detract from the variety of fighting styles, and almost any character will react similarly to certain button inputs. For instance, regardless of who you pick, an input of Punch-Punch-Punch-Back+Kick will yield a quick four hit combo. Learning one character almost puts you at a universal understanding of the others. Hitting back plus punch and kick almost always produces a charged hit and the A button always handles throws. This is completely different than Soul Calibur, in which learning Mitsurugi is a completely different process than learning a character like Maxi or Nightmare. 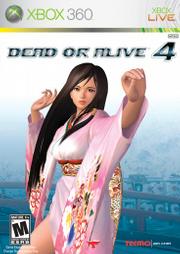 Fights are almost always fast and furious, and will oftentimes end within 10 seconds. The large majority of the levels are visually impressive and well-designed. There's a level based on Jurassic Park, and others set around casinos, mountaintops, waterfalls and even a Halo level. Some levels are swarming with interactive environmental elements (one features cheetahs and a bison stampede). As you learn the levels, you can certainly use them to your advantage. For instance, the mountaintop level features tons of staircases that you can knock your opponent down. Position yourself right in an online match, and you can end the match with a few well-placed kicks.

The Story mode consists of eight stages, and is certainly difficult even on the easiest setting. While not every character faces her, the final boss Alpha is easily the most infuriating character I've ever fought against. She's a semi-floating blob of blue goo (in the shape of a big-breasted woman, in typical DOA style), and she has a tendency to constantly unleash devastating, nearly un-blockable 9 to 10 hit combos. In addition to this, she has an arsenal of hugely damaging throws. It's an absolutely awful last boss stage, not only because of the difficulty, but also because the environment in which you fight her is terribly bland and unoriginal.

Outside of Story Mode, there is also Time Attack and Survival. I particularly enjoyed Survival mode, because a new enemy immediately jumps into the ring when you defeat the previous one. The game doesn't stop to load the new enemy like a lot of other games. Time Attack is essentially the Story Mode, but there are medals and unlockables that you can achieve. When you finish either of these modes, the game will connect to Xbox Live and show where you rank on the worldwide leaderboard.

Characters in DOA are really a mixed bag. I'd say that without a doubt, Hayate is the best fighter in the game. He features some vicious kick combos that are difficult to counter, regardless of how experienced you are. There are also some definite "cheese" fighters, which are unfortunately very popular online. Ryu from Ninja Gaiden is the main offender here, with ridiculous warping moves and lunging attacks. Some players online will constantly do the same two moves over and over with Ryu, and it becomes extremely annoying.

Bayman is also another infuriating character to face, especially in the later Story Mode stages. He has a tendency to counter one of your attacks by turning it into an extended series of throws that take away massive amounts of health. Brad Wong is a good character, but extremely difficult to fight against thanks to his Drunken Master style. Jann Lee is an obvious Bruce Lee knockoff, and can be beaten easily if you consistently do high-counters. Most of the other fighters are typical interchangeable big-breasted porcelain doll females. My main complaint with the DOA series is the pathetic attempt to make these characters look "hot" (this all goes back to the retarded "she kicks high" commercial). I'm sorry, but I play videogames for gameplay, and I'd much rather look at real women than an assortment of polygons. Some endings feature near-nudity, stripping, and breast-grabbing. There is one word I want to use to describe this aspect of DOA "stupid." Don't even get me started on DOA Beach Volleyball.

Characters don't look that much more detailed than they did on the original Xbox. Some parts of them do, such as the fabric on Ryu's hood and mask, but they're overall not that impressive. The environments, on the other hand, can be stunning at times. The river in the waterfall level looks absolutely amazing, and almost all of the outdoor levels look fantastic. Rendered end-game cutscenes may not add anything to the "story" (if you can call it that), but they feature stunning levels of detail. Audio is generic rock, but never gets too annoying. For some reason, the game includes two Aerosmith songs (for the opening cinema and end credits), which I thought was an odd choice.

The real star of Dead or Alive 4 is the online mode. As of this writing, I've completed over 400 online matches against a wide variety of opponents, and I can say that it is extremely rewarding. You start out with 10,000 "grade points" and a rank of C. Winning a standard 2-round match will earn you 100 points. You also get 10 extra points for each match you've won in a row. That's assuming you're playing an equally-ranked player. If you're a C and you beat an A, you'll get hundreds of handicap bonus points. This presents gamers with several options for climbing the ranking ladder. You can enter rooms filled with D and F players, and beat up on them for 100 points apiece, or you can try to defeat A players and get tons of handicap points.

The risky part about targeting lower ranked players is that if you happen to lose, you're going to lose a ton of points. For instance, as an A-, I'm often tempted to fight C and D players to get some easy wins, but it still makes me really nervous to think that I could lose over 1000 points if they happen to beat me. It's also possible to do tag battles, which can be great if you're teaming up with a friend. The online lobby is also an added bonus, with tons of buyable avatars and accessories. Lag is present in about 50% of matches, with varying levels of severity. Sometimes it can be crippling, and can be your worst enemy in such a counter-based game. Let's say I'm going for a high kick during an especially lag-plagued match. The other player might have up to 3-4 seconds to see the kick coming, and counter accordingly. The game also seems to have a problem with handling the Xbox Guide when it's connected online, and freezes very often.

Don't get me wrong, DOA4 is not a perfect fighting game by any means. Soul Calibur and Virtua Fighter are both head and shoulders above it in terms of sheer gameplay. It's the online aspect of DOA4 that gives it massive replay value. If you don't have Xbox Live, I probably wouldn't even recommend anything more than a rental. If you do have Xbox Live, however, it can be a hugely rewarding game with near unlimited replay.