I certainly appreciate the amount of titles for the DS that build the core gameplay around the use of the stylus. Although it was once questioned, there is now no doubt that the DS has positioned itself away from the GBA as a third pillar. With the help of T&E Soft, Nintendo brings a first party golf game to DS sports fans who may like to try something else that isn't Tiger.

TSG tries very little to please on a visual level. Heck, there aren't that many options and features to immerse yourself in, either. But the stylus-centric swing mechanics are so tight and intuitive that it makes a few rounds of golf every now and then a pure joy.

After selecting your club and shot, you simply drag the stylus back for power and then drag it forward as fast as you want to gain your full potential. Now, you have to hit the ball straight on to gain accuracy. The faster you drag, the more room for error you'll have, in turn shanking a shot. So learning to drag a straight or accurate line becomes crucial. The more you experiment with hitting a little left or right of the ball, the more your drag/swing becomes an art. 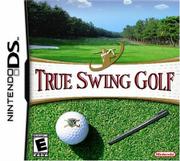 It is in this central gameplay mechanic that makes TSG a success. Indeed, the touch-sensitive responses are so well executed that you can truly make the "True Swing" claim. Furthermore, the physics of the ball behave appropriately, which is absolutely necessary to get the desired effect.

Of course, if you're the judge-a-book-by-its-cover type of gamer, then TSG is not impressive at all. No real players or courses (EA owns the license), no real modes outside of a basic career mode, dull interfaces, no replay save features and graphics that are pretty basic and jagged. 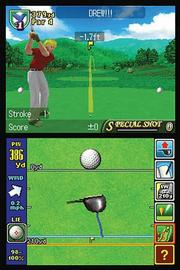 The courses are really well designed and feature equal amounts of easy and more difficult terrain to deal with. The career mode allows you to progress effectively, letting your skill increase proportionately with the difficulty level of the following courses. If you have golf-loving friends, you can hook up with three others and engage in some multiplayer strokes.

The characters animate well, but the entire look and display of the game feels seven years old. The graphics fail to impress on any DS-appropriate level. The sound is minimal, but effective, but still won't pull you into some audiological wonderland of excitement.

TSG is a great core golf game with few extras and zero pizzazz. The touch swing mechanics justify the purchase alone, but don't expect to spend hours outside of the standard game of golf.