DJ Soap remembers a time when he could rock a party with Prince, Madonna and Michael Jackson.

Nowadays, he's more likely to do it with Sublime, Nirvana and Kris Kross.

"People still like that ('80s) stuff, but I get tons more reaction out of the '90s stuff," says Soap, a 25-year-old Lawrence DJ. "People just go crazy when I throw out some Notorious B.I.G. or 2Pac : I think we're going to see more of it in the years to come."

Soap - a.k.a. Ken Soap - fired up "I Love the '90s" last Wednesday at Johnny's Tavern with co-host DJ Sku. The duo hopes to capitalize on what they perceive as shifting demographics within Lawrence's nightlife.

"For a lot of people that go out now, the '90s was the time when they were in high school and that's the music they want to listen to," Soap says. "Sku and I both had the same thought: the '90s are like the new '80s. I threw the idea out to him and his eyes lit up and he said, 'You know, I was thinking the exact same thing.'"

Soap and Sku aren't the only ones getting hip to the neo-'90s revival. 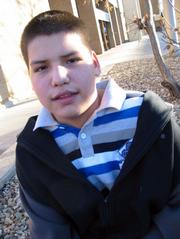 Tune in to 96.5FM The Buzz during the weekday noon hour and you'll be bombarded by a "'90s @ Noon" onslaught of Beastie Boys, Ben Folds and Soundgarden.

Flip on VH1 for "I Love the 90s" and witness the witty antics of stand-up comedians dicing up the best and worst of '90s television.

Tune in to MTV and a number of other channels, and you'll find back-to-back episodes of '90s shows like Beavis and Butthead.

If you're like 20-year-old Chelsea Bell, however, it may all seem a bit premature.

"Maybe in 10 years I'll know the difference between the '90s and the '00s. But as for right now, dude, I can't really tell the difference," says Bell, who works at Affinitas and spends most of his time watching Adult Swim and following the local hip-hop scene. 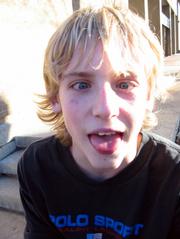 Instant nostalgia is nothing new to Steve Wilson, 53. The manager of Kief's Downtown Music recalls a time when '50s nostalgia hit during the early '70s and bands like Sha-Na-Na enjoyed a brief revival of popularity. Since then, Wilson says, nostalgia has been compacted ever closer to the present day.

"The way these things are packaged, it's always some highly refined and specialized notion of what an era constitutes," Wilson says. "People talk about '70s music and what do you get? Bee Gees. Even that friggin' Cameron Crowe movie 'Almost Famous' - I kept watching that and going, 'Your '70s, not mine, buddy'."

At its best, looking back gives people an opportunity to see what was good and not just at what topped the charts, Wilson says.

"Typically, one hit wonders end up getting more respect than career artists," he says. "If you go to 'Funkytown' in Raytown, which is like a '70s and '80s disco, the good stuff is not what you're going to hear. You might hear 'Heart of Glass' - if you're lucky." 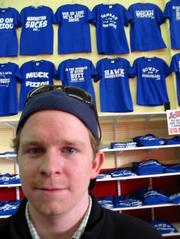 What do remember most about the '90s? Tom O' Gara, 25, KU senior in economics: "Long butt-cutt hair parted right down the middle and Starter jackets."

Veteran local DJ and show promoter Edwin Morales has also noticed the '90s coming back into fashion - but not always for the right reasons.

"Last year people were playing a lot of La Bouche - this shitty early '90s techno," says Morales, who hosts the traditionally '80s-based dance party, NEON, Thursdays at The Granada. "You know that movie 'A Night at the Roxbury' where the guys are bobbing their heads side-to-side and they're playing that shitty techno song in the background? : That stuff."

Morales says he tries to incorporate "the weirder stuff" from the '90s into NEON, which also features modern-day electroclash, hip-hop and electronica.

"Kids are making more requests for '90s music," Morales says. "I hadn't touched on the rare stuff because I didn't think kids would appreciate it. Nowadays, they do."

Morales senses that "the '90s thing" has already come and gone in New York City and Los Angeles and is now beginning to trickle into the Midwest.

"Because we're living in such an accelerated culture, cycles shorten," he says. "The '80s aren't going away necessarily, but it's becoming more of a, 'Ok, this exists, so what's next? What's next of the past?'"

For the sake of shits and giggles, that may not necessarily be a bad thing.

"This dude showed up at the club the other day wearing everything backwards like Kris Kross," Morales says. "I was like, 'Yes! That is ridiculous!'"

The '90s also figure prominently in the ever-changing world of contemporary fashion. 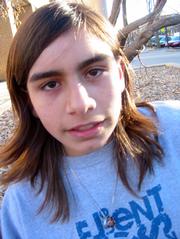 Buckle manager Hayden Fowler says that his store's current inventory reflects many of the styles that were popular in the early '90s.

"It's the tighter fits, boot legs, some flares and definitely lower rises," says Fowler, who has managed Buckle since 1994. "Fashion is always going to change so retailers can sell new stuff. The cycles are predictable."

Brands that were popular in the '90s have taken different routes with varying degrees of success, Fowler says. The once fashion-forward Mossimo is now a Target brand, whereas Guess reclaimed its hip quotient by withdrawing from chain stores.

"They were smart enough to pull it back in and carry it only at their own retail shops," Fowler says. "Now that they're popular again, they're carefully starting to spread out but they're paying more attention to who they give their clothes to."

One style that's definitely out is the baggy look, Fowler says. Buckle carries only about 50 "wide-leg" jeans out of a total of 6,000 pairs.

"Everything is more fitted now," Fowler says. "We've also seen the '90s come back with the vintage tight-fit t-shirts."

What do remember most about the '90s? Jim Sorenson, 23, KU senior in sociology: "Adidas Sambas"

"We did really well with old flannels this year, which kind of surprised me," says Sievers, who also managed ATC for four years in the late '90s.

"I don't see, like, cut-offs with long-johns like you used to see in the '90s, but I do see little things here and there that definitely are coming back," he adds. "You can get a $90 pair of Abercrombie jeans now that look like they've been dragged through the mud."

Though "mixing it up" is the dominant trend that Sievers spots in contemporary fashion, he says that grunge is still very much the status-quo for mainstream music like Nickelback, Saliva and Seether 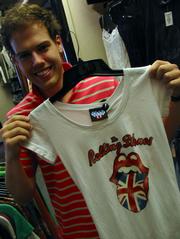 "It's like third-wave grunge - it never really went away," says Sievers, who plays drums for local punk band Mass. St. Murder. "Bands have been riding that bandwagon for the last 10 years. I think it's on its way out : at least I hope so."

I Want It That Way

The '90s fever pitch has also infected the gaming world in the form of "retro gaming."

"Some of the rarest games can go upwards of $100," Nutt says. "I think the average video game consumer is getting to be the age where they want what they grew up with again or want to show it to their kids." 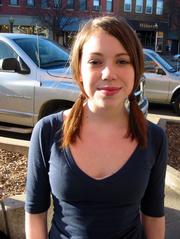 What do remember most about the '90s? Copper Ramberg, 14, Central Junior High: "Tae Bo workout videos and Richard Simmons."

One segment of the entertainment industry that may be lagging behind the '90s bandwagon is DVDs of television shows. Miracle Video Clerk Jon Feeny says that '80s shows like "Miami Vice" and "Magnum P.I" have been far more popular than '90s shows.

"I don't think people are as ready to revisit the '90s TV stuff yet - it doesn't feel as retro," Feeny says. "I look back more fondly on the '80s than the '90s. That's when I was still a kid and I still believed in stuff and everybody wasn't all evil and everything. There was still promise in the world."

Feeny says that the only '90s shows that people rent frequently are "Seinfeld," "Mr. Show" and "The Ben Stiller Show." He doesn't plan on purchasing the long-awaited "Beverly Hills 90210" box set when it arrives.

"It's not the type of thing I want to encourage."

So, the ninties are retro and 'in' right now? Gracious--I'm gettin' old!

hahaha lovely. those kids are priceless.

I'm pretty sure I never left the 90's. I've been holding on this whole time.

thanks for including that sweet super nintendo controller in the graphic :-)

Early 90s yeah. Mid/late 90s still seems to current to revive. So, if NYC and Los Angeles have already surpassed the 90s revival, where does that put them now? like 2001, 2002? "Those bastards-- How could they have moved into the new millenium already without us?"

The only thing i remember from the nineties is jerking off to Xena Warrior Princess.