These days, the term "stargazing" might be used more often to describe the kind of red-carpet gawking perfected by Joan Rivers than the subtle pastime of sitting quietly and observing celestial bodies aglow in the night sky.

But there are plenty of astronomically inclined souls left in Lawrence, and they see a certain amount of romance in the hobby.

"It is just beautiful," Kansas University physics and astronomy professor Bruce Twarog says. "It's stunning, especially if you go outside Lawrence to a nice, dark site."

But there's the rub.

Most people live in cities, where light floods out much of the eye candy the heavens have to offer.

Beyond that, astronomy - even the armchair variety - can be an intimidating pursuit. With all those twinkling lights in the sky, how can a newcomer begin to make sense of the barrage?

We consulted a few experts from Astronomy Associates of Lawrence for tips on how to get started. Turns out, the naked eye, a sense of curiosity and some free resources are the only tools you need to enjoy the stars.

And who knows? Your newfound stellar knowledge might even open the door to a cheap date option. Who wouldn't be swept off their feet by a guided tour of the galaxies? 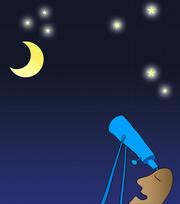 "I've never heard of astronomy being used as chick magnet before," Twarog says, laughing. "I guess you could try."

But first you'll have to go it alone. Get started by learning your way around the sky, says Rick Heschmeyer, a member of the astronomy club. Become familiar with some of the major stars and constellations.

How? Web sites like Skymaps.com and Skyandtelescope.com offer free, downloadable monthly charts with detailed descriptions of what to look for - and where to find it - with the unaided eye, binoculars and a telescope.

Be sure you're working with up-to-date information, though. The Earth changes position in the solar system throughout the year, making different phenomena visible.

Club member William Winkler recommends that you don't wait long before involving someone with more experience in your investigations.

"If you're just going to do this on your own, you learn, but it takes patience and skill," he says.

So just what could you see this month if you set up a lawn chair in your driveway after dark and craned your neck skyward?

"Right now there are quite a few planets that are visible. Jupiter's probably the most prominent," Heschmeyer says. "This time of the year, say about 10 o'clock or so, when it's nice and dark, it would be kind of in the south, southwest part of sky, up pretty high. It's the brightest thing that you'll see."

A few other highlights this month, according to Heschmeyer and Skymaps.com:

¢ Mars, Saturn and Mercury will be lined up below the moon on the western horizon right after sunset this weekend. A hint for spotting them: "Planets don't twinkle, for the most part, and stars do," Twarog advises.

¢ The ever-present Big Dipper is detectable in the northwest sky. Follow the curve of the handle away from the dipper, and the first bright star you come to is Arcturus in the constellation Bootes, Heschmeyer says.

When you're comfortable navigating the night sky - and you're certain you want to learn more - it might be time to invest in equipment to enhance your stargazing experience.

Even binoculars - which you might already have on hand for bird watching or football games - drastically increase access to the astral landscape. A good pair will set you back anywhere from $50 to $400.

Telescopes can be vastly more expensive, but a beginner needn't spend more than a couple hundred dollars, Twarog says.

But Winkler recommends spending a lot of time looking through other people's telescopes before snagging your own.

"There are many telescopes sitting in attics unused," he says.

If you don't know anyone with a scope, the Lawrence astronomy club plays host to observation sessions throughout the year.

The next one is scheduled for about 9:30 p.m. July 12, following the City Band Concert in South Park. Club members will set up telescopes on the west side of the park, weather permitting, and help visitors see what there is to see.

By the way, if you haven't looked through a telescope in a decade or so, you might be surprised at how much easier they are to use these days. Many models have computers and GPS technology. Basically, you tell the computer what you want to see, and it points to it.

"In some ways, you really don't have to know anything (about astronomy) to run a small telescope," Twarog says. "They have data that operates on a day-to-day basis, so you can see the planets, for instance, in different positions from one day to the next."

If the very thought of picking up a hobby that has anything to do with science stresses you out, consider this: Heschmeyer swears by the relaxation power of astronomical observation.

"It's sort of my way to wind down at the end of the day, when all the kids have been put to bed and everything's done," he says. "I can go outside and sit in the driveway and spend 45 minutes or an hour looking at things, and it's kind of a fun way to relieve some of the stress from life."