Tearjerker Moment: ":even when I move, you'll always be my teacher!" Lan to his elementary school teacher

When it comes to sequels, no one can compete with the infamous blue bomber Mega Man. Over his nearly 20-year existence, he's been the star of almost 50 different games on this side of the Pacific alone. Not too shabby for a little blue robot.

It's no surprise then that Capcom's foray into the RPG-genre, the Mega Man Battle Network series, has already reached its sixth iteration in only five years. Like the more recent titles in the series, Mega Man Battle Network 6 comes in two varieties: Cybeast Falzar and Cybeast Gregar. Unfortunately, that's not the only thing this one has in common with the past games. Battle Network 6 still features the same old graphics, sound, and general gameplay as the last five, with only a few small additions and improvements.

For those new to the series, the Battle Network games follow the story of elementary school student and Net Battler extraordinaire Lan and his Navi companion Mega Man. Navis are basically digital pets that exist in their own cyber world, sort of an alternate dimension to Lan's real world. The story itself picks up shortly after the events of the last game. Lan's father has been given a new job in Cyber City, and the entire family has to pack up and leave ACDC Town, the setting from previous games. This brings an entire new cast of characters for Lan to interact with, although these new additions don't seem nearly as fleshed out as the characters from the previous titles. 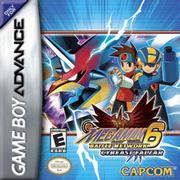 The story itself ultimately becomes one of the game's stronger points, although it takes a fairly long time to get rolling. After a few hours of gameplay, a group of mysterious enemies unleash the fury of the titular Cybeasts onto the Net, resulting in all manner of chaos. Following this cataclysmic event, things finally start to shy away from the sixth-grade school transferring drama that bogs down the beginning of the game. Fans of the series will likely want to play through for the story alone, as it ties up a number of loose ends from the previous games and finally manages to link the Battle Network saga with the overall Mega Man mythology.

Unfortunately, besides the new setting and characters, the game really doesn't have much to offer in terms of new content. The gameplay is built off the same basic design of the last five games, and the new features turn out to be more of a refinement than a revolution.

The main gameplay of the Battle Network series revolves around guiding Lan and Mega Man through their respective worlds in effort to move the story along through a series of quests. While past games have had plenty of annoying fetch-type quests, this one seriously borders on overkill. Most of the game's quests revolve around this tedious formula, and many players will find themselves bored to tears with meaningless backtracking and inane items to collect. At one point, you literally have to hack into a toilet's computer system in order to retrieve a plumbing "tool".

The combat system has always been a strong point in the series, even when the quests themselves seem completely pointless. Fights take place on a 6x3 grid in real time, with Mega Man moving on one half of the board and the enemies on the other. Equipped with his trusty buster cannon, Mega Man can always charge up and fire at the enemies for minimal damage. However, the real strategy comes in the form of the game's Battle Chip system, which works like a collectible card game in disguise. In all, there are 250 chips to collect throughout the game, and each of these can be employed in battle to do a variety of special attacks against the enemies. Picking out which chips to use against which enemy supplies a good portion of the challenge. After a few hours though, even this becomes tedious, especially considering the rather high number of random encounters you'll have to deal with.

The game also presents a few new battle options in the form of the Cross System and the Beast Out system. The Cross System allows Mega Man to take on the abilities of one of 10 different unlockable Navis, giving him a different basic attack type in addition to elemental bonuses and drawbacks. The Navis you can unlock vary between the two different versions of the game, so if you absolutely want to get them all, you have to play through both. The Beast Out system is the game's other main addition, and once again, it varies depending on which version of the game you pick up. About half a dozen hours into the game, you will unlock the ability to transform Mega Man into each version's respective titular creature. Both of the Cybeasts give Mega Man a new attack style and each has its own unique set of bonuses. However, Mega Man can only stay in Cybeast form for a limited amount of time and after the counter runs out, he will have to revert to his normal self to recover. Furthermore, this Beast Out system can be coupled with the Cross System to give Mega Man extremely powered up elemental-based abilities. Overall, these new systems make combat more enjoyable, even if they don't completely overhaul the core gameplay.

Graphically and aurally, this title is essentially the same as every other in the series. That's not saying much, considering that the series' graphics were only above average four years ago. Character animation is minimal and in many cases, non-existent. Most "action" cutscenes in the game involve an establishing shot, a fade to black, and then an aftermath shot. This might have been alright for the first few games, but considering today's handheld capabilities, it's simply unacceptable. Sound also suffers from the same problem. Much of the game's music and sound effects have been recycled for six titles now, and while it is nice to hear some of the classic Mega Man songs, something a little fresher would have been more than welcome.

Everything considered, Mega Man Battle Network 6 is really only worth it if you're a diehard fan of the series, want to see how the story develops, and don't mind playing essentially the same game for the sixth time. Newcomers might find the game's unique battle system entertaining, but the story starts off on such a juvenile note and develops so slowly, that all but the most patient gamers will give up after a few minutes. All told, there are simply better RPGs out there by today's standards, even for handheld systems.