Don't Try This At Home: Lighting yourself on fire does not actually improve your ability to play sports. Attempt at your own risk.

Once upon a time, Midway was in charge of the extreme sports genre. Between the NBA Jam and NFL Blitz games, it seemed they could do no wrong, and gamers everywhere rejoiced. That time was about 10 years ago, and oh what a difference 10 years can make.

Their latest release, MLB Slugfest 2006, follows the same tradition set forth by the aforementioned series, in that it takes classic baseball gameplay and basically throws out half the rule book. Players can use their turbo meter to perform superhuman feats on the field, can literally set their players "on fire" for major bonuses, and can punch members of the other team unconscious, all without fear of interruption from the ump. While all these elements have helped the past Slugfest titles to stand apart from other more traditional simulation-based baseball games, the 2006 version simply seems rehashed from the last game, and in some ways inferior. 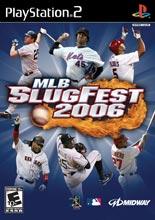 In the two years since the last title in the series (MLB Slugfest: Loaded), sports games have advanced significantly, both graphically and in terms of gameplay. Unfortunately, Slugfest has not. Slugfest 2006 is built off the same graphics engine as Loaded, and the gameplay is virtually identical, with a few noticeably missing game modes. Most notably, the online mode has been completely taken out, severely hindering the game's replay value. The game is still fun to play with friends on one system, but considering almost every other sports game on the market has competitive online play these days, the omission is inexcusable.

Furthermore, the franchise mode has been removed and in its place, a half-baked 52-game season mode stands. With no player trading or team management tools, the season mode seems more of a cheap ploy to squeeze out gaming hours than a well-thought out refinement. Other available modes include a Home Run Derby mode, a Create-A-Team feature, and a Challenge mode which allows you to play against all 30 of the game's MLB teams from worst to best.

The game's one real addition is its Create-A-Player feature, which seems fairly half-assed (which is the case with most of the game). Players can select from a small assortment of heads, body sizes, and accessories, but the level of customization feels pretty minimal. It's nice that they finally added a feature like this to the series, but its inclusion at the cost of better game modes just doesn't seem justified.

Gameplay wise, 2006 is virtually identical to Loaded, which is actually a good thing since Loaded provided a fun, simple arcade style baseball experience. While batting and pitching are considerably less complex than other sim-based baseball games, they make for an easy experience that still provides a decent challenge. When pitching, you simply have to aim where you want to throw, select one of the four basic pitch types, and whether you want to throw a strike, ball, or bean. After five successful strikes, you also unlock the ability to throw a special pitch. These vary from pitcher to pitcher, and have odd names and flight paths, such as the Tornado and the Butterfly.

While the gameplay itself holds up fairly well, the graphics do not. Using the same graphics engine as Loaded, Slugfest 2006 looks downright dated. The player models are very basic looking, and the animation is pretty stiff. Several of the player models only bear a passing resemblance to their real life counterparts, which is pretty disappointing when compared to other sports games on the market.

The sound isn't much better. The game's soundtrack is pretty limited, and what is there isn't all that great. The game's announcers are pretty hit or miss as well. Midway veterans Jim Shorts and Tim Kitrow once again provide their trademark booth banter. While some of their jokes are mildly humorous, there's simply not enough commentary to go around, and after about an hour or two of playing, you'll start to hear several of the same lines repeated.

It's really hard to recommend Slugfest 2006 for anything more than a rental. Even at it's budget price-tag, there's just not enough content here to warrant more than a few hours of gaming.