Stick with: Most other RTS's

The long-delayed Rise and Fall: Civilizations at War has finally landed on store shelves, seeking to earn it's place among a crowded genre chock full of great titles that have released in the last year or so. Seeking to combine a real time strategy core with an action twist, the developers hoped to provide a whole new kind of strategy experience on the PC. The idea's are relatively solid and had me exited to install the game, but the novelty of the concept faded rapidly shortly thereafter.

Rise and Fall is a perfect example of a game that dreamed big but failed to execute properly. A lot of this was probably due to time and budget constraints, as is all too often the case with a lot of these "me too!" PC copycats. 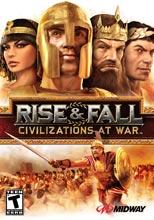 This title is basically an RTS in the same vein as Age of Empires, Rise of Nations, Warcraft, etc. You gather resources, construct new buildings with which to support or create new units, and then you try to destroy the opposing, historically accurate (mostly), empire. Where this game sets itself apart is how the battles work. When you have a unit (or a formation of units) attack an opposing force, you have the option to basically zoom down and fight the battle yourself via a handful of different ancient era combat moves. Essentially that means you can run around slashing your sword and kill things. It works, but it just isn't any fun.

Honestly, I didn't see the point of the action elements of the game at all. It's not really an issue of whether it's fun or not (it isn't really) but more about why it is there in the first place. The outcome of the battles seem to generally be the same, whether you choose to fight them out or not. After a few fights, I honestly felt like I was just wasting my time with it.

The rest of the game doesn't get much better, as its basic RTS elements are generally flawed. Unit control is sloppy and path-finding is atrocious. It honestly reminds me of the original Age of Empires where units would continuously get stuck behind buildings, resources, trees, water, etc. I like the concept of formations and how multiple unit types can form into a single military group whose combat effectiveness is greater than that of its parts, but moving them is equally clumsy, painfully slow to put together and can be broken apart relatively easily in combat or the simple act of boarding and unloading from a ship, forcing you to reconstruct it, often while in the middle of a fight where doing so is hopeless.

The AI was also a point of contention for me. After just one or two games, it was not difficult at all to figure out the AI's weak points. To be more specific, the use of certain tactics seem to bewilder the AI and pretty much guarantee victory. As far as strategy games go, nothing bothers me more than a match where I have to specifically force myself to play down to the computer opponents skill level because it can't figure out how to play the game.

This game has been in development for a long time and this is very evident in the final product. Often times when a title is moved from publisher to publisher (or worse, from developer to developer), the game will ship with a very "dated" feel to it and that is exactly the case here. The graphics are fair to poor in quality, with bland textures and low poly models filling the screen. I'd be much more forgiving if this was 2003 or 2004, but they really don't cut the mustard in 2006.

Overall, I won't say that it's a terrible game, but there were a lot of issues that just made the experience so annoying and frustrating, that I just can't recommend it to anyone. There were moments where the game was fun, but were just too far overshadowed by the poor production to be happy with overall. In all honesty, only the most diehard of RTS fans should even dare risk purchasing this title, and I can almost promise you that you will be disappointed. Go read the Age of Empires III review instead and pick that one up, you'll have a lot more fun. Trust me.