Why: Does one house have 80,000 grandfather clocks?

When I first turned on Monster House for the Nintendo DS, the last game I expected it to play like would be Smash TV. Surprisingly, this game (based on the upcoming animated film) has a large amount in common with the coin-op classic. It's not heavy on story or deep gameplay mechanics, but the old-school feel can be fun in short bursts.

You can play as your choice of three characters from the film: DJ, Chowder and Jenny. DJ is pretty much average in every way, being neither particularly fast or powerful. Chowder is significantly slower, but his water gun can spray in three directions. Jenny is pretty quick and fires her dual water pistols in quick bursts. They're actually pretty balanced, and I found myself liking each of them for specific levels/situations.

The d-pad is used to move, and the stylus performs every other function. As you move the stylus around the center of the bottom screen, your character will shoot their water pistols in that direction. It works identically to the right analog (or arcade) stick in Smash TV, and it performs very well. As you fire, the water pressure in your gun will drop. At this point, you have to move the stylus up and down on the pump on the right side of the screen. 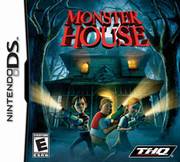 There are 54 rooms in the house, and they're all extremely short (most can be completed in under 2 or 3 minutes). Each room is populated with a huge amount of haunted objects, including dishes, grandfather clocks, books, record players, piles of rubbish and indestructible refrigerators. As you progress through the game, it really does a good job of constantly introducing new foes to deal with. Most of the game isn't overwhelmingly manic, but you'll encounter some areas that absolutely bombard you with a screenful of enemies.

Any arcade-style game worth its salt should have some power-ups, and Monster House has plenty. You can get Contra-style spreader upgrades to your water pistol, invincibility, tidal waves, slingshots that shoot water balloons, speed shoes and water rockets. Later in the game, it introduces crates that can be destroyed to get power-ups. I really don't understand why these weren't included from the very beginning of the game, as I thought this was a better approach than randomly-spawning items.

While most of the levels can be pretty fun, many include some annoying features. A little over halfway through, you'll run into some pits that will kill you instantly. Considering how much action can be onscreen at one point, it's easy to be looking at one enemy-infested part of the screen and not even realize that you're about to fall to your death. If these only took away one health unit, it wouldn't be a problem. Unfortunately, they instantly kill you no matter what. Many rooms include loose floorboards that will trap you temporarily when you walk over them. They aren't a real annoyance until they start moving around constantly, and it really doesn't make sense when they're on concrete floors.

Visually, Monster House is perfectly adequate for what kind of game it is. You never really get a close-up look at the characters except for pre-mission segments, but they look good. I encountered a couple framerate drops during especially hectic segments, but nothing too distracting. At times, the game will throw something new at you, such as the nice effect of the floor warping beneath you during an early boss fight.

Despite the competent graphics, the audio is actually pretty bad. The music is terribly generic and uninteresting, and it seems like the sound effects could have been pulled from any SNES action title.

Monster House can certainly be fun, but the formula grows a bit tiresome near the end of the title. It can also be beaten in under a few hours. You can use different paths to go through the house, and there are also 100 toys to collect, but I can't imagine most gamers going through this multiple times. Fun for the first playthrough, and it should certainly be worth checking out for its target audience (young fans of the film).