Good: Great new sets, costumes and props for the movie maker in you

Originally hailed as the next great leap in Sims-style gameplay, "The Movies" generally failed to meet the high expectations set for it by its developers and the media alike. That said, they still made a very fun game that appealed to Sims fans and creative film students alike. The new "Stunts and Effects" expansion pack seeks to expand the palate of available options and tools beyond the already extensive collection that the original game offered. The package certainly accomplishes that feat, but fails to fix the more pressing problems for which fans have been waiting.

"The Movies" has two very distinct parts. First, it's a simulation game where the player is directed to found and operate a fledgling movie studio beginning in 1920. As time passes, you build new buildings, hire more employees and develop new movie making technologies to make your films shimmer and shine. You can think of it as "Movie Studio Tycoon". The second part is actually a simplified type of movie making software. You can pick your actors, dress them in any costume you like, pick your sets and backdrops and then direct your scenes through a large number of pre-built animations and situations. With a good amount of time invested, you can actually make some intriguing short films, all of which can be saved to a Windows Media format to share with friends and family. 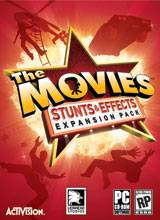 This is probably one of the least creatively named expansion packs ever, as the title describes exactly what you are getting. "Stunts and Effects" primarily expands upon the second part of the game, the movie maker portion, as just about everything in the box relates to the new stunt man additions and adding new special effects to your movies. You get a slew of new sets, costumes, animations and props to play with, as well a few new camera abilities. The new "free cam" option for instance, allows you to move the camera about the set and shoot the action from different angles, including the ability to zoom in and out. While you have to be careful to keep the camera's focus within the set, it can certainly add a fun and dramatic element to your movie making. A new particle effects engine allows for all kinds of explosions to create action filled-shots, especially when used with the new miniature sets and objects that allow you to build scenes in large city blocks or make use of helicopters, UFOs and more to create those explosions. All in all, these additions can really add some bang to your films, without ever requiring you to animate a thing, as is "The Movies" style.

While most of the pack really focuses on the movie making side of the game, there has been one sizable addition to the tycoon side, the stunt man. In addition to your actors, directors, builders and more, you must now hire, train and maintain stunt men. After all, you don't want to risk your very expensive and beautiful actors/actresses by throwing them off of buildings or blowing them out of cars, do you? Stunt men work in much the same way that your actors and directors do. You have to keep them happy, well paid, healthy and trained. Each stunt that can be performed has a certain difficulty level that corresponds to your stunt men's skill level. A stunt that requires a great deal of skill needs a real expert and if your stunt man isn't up to the task then he is likely to get hurt, requiring a trip to the hospital. So it's best to start with the easier tricks first. The only complaint with this new addition is that the difficulty of each stunt does not make as much of a difference as it should to your stunt man. Even the most skilled stunt expert can get hurt on the easiest of stunts more often than they should. So you wind up needing to maintain a few stunt men at all times, no matter how skilled they are, because they will inevitably get hurt, regardless of how difficult a task they are asked to perform. As you might expect, this can be frustrating.

While this is a relatively robust package that accomplishes most everything that it was created to do, it will leave a lot of fans wanting more. Very few of the problems that were created in the original game have been fixed, such as an inability to direct your workers to stay and work in certain areas of your studio, the limit on how many employees you can have at a time, the major lack of applicants seeking jobs at your studio and more. Adding the stunt man element is all well and good, but when it comes with its own set of problems, the whole benefit of the addition becomes negated. So they certainly could have made a lot of improvements to the tycoon simulation side of the game that has been neglected in this package. On the other hand, those who enjoyed the movie making experience of "The Movies" will love this expansion. "Stunts and Effects" adds a great deal of replayability to the original game that will certainly have you coming back for more, readily subjecting your friends to another round of homemade movie clips that you create with it. So, if you enjoyed the game itself and had a lot of fun making movie shorts with it, then you will enjoy this expansion. If you are primarily a tycoon gamer and just had fun running the studio and manipulating your sim employees, then you should probably wait and hope that Lionhead will decide to make another expansion pack that addresses these needs.