Faces of the fair

"State Fair" is a thoughtful, sometimes funny, consistently interesting collection of 103 black-and-white pictures taken at 10 state fairs. They include fairs in California, Texas, Minnesota and even Kansas.

The book's subject matter covers a lot of the usual suspects found at most state and lots of county fairs. There is the eating contest, beauty queens, ribbon-winning 4-H members, livestock competitions and pictures of the fair faithful, who often look as though they walked to the event from home.

Fortunately, thoughtful, interesting and funny also describe the mental muscle that photographer Arthur Grace applied in making the photographs in the book.

The book's cover is not a bad photograph, but it's misleading. It's a telephoto shot showing mostly youngsters, clamped into their seats, high above the midway on a "thrill ride."

Under the cover, Grace presents the fairs on a quiet, personal level with few similarities. He gets in close on a well-framed shot of a tattooed and shirtless Kansas arm wrestler and backs off a little on the winner and runner-up in Ohio's grocery-bagging competition. In Texas, he moved in, showing the girth and business-as-usual expression on the face of a corn-dog-eating champion. Grace shoots like he knows where he's going, with a purpose. His book isn't about kids eating cotton candy or after-dark time exposures of ferris wheels. 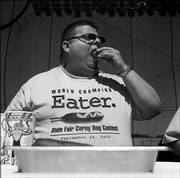 Arthur Grace/Special to the Journal-World

There's an amusing shot of a juggler smiling at the audience with two rubber balls in his mouth. Looks better than it sounds.

The photos are far from being stylized. It would be tough to produce cookie-cutter images using three photo systems. Grace shot with a twin lens Rolleiflex that produces a 2 1/4 inch square image; M model 35mm film Leicas and a Leica Digillux 2, a comfortable digital camera that sports a 28 to 90mm 2.4 zoom lens.

Grace's photos indicate a mindset to photograph his subjects as they actually are, not compressed or isolated beyond what the eye normally sees. He finds humor in the ordinary and quietness in a demolition derby. In the book, there are lots of people smiling, but none laughing. 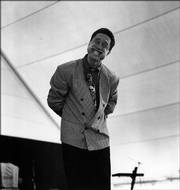 Arthur Grace/Special to the Journal-World

Grace's impressive background as a photojournalist indicates he's seen life through a variety of lenses. A Boston native, his first out-of-town assignments for United Press International was turmoil in Northern Ireland and the Middle East war.

He's shot for The New York Times, Time Magazine for seven years and was a Newsweek staffer for four years through 1990. He's produced still photographs for Hollywood productions and made photographs for corporate advertising. "State Fair" is his third book.

His first was "Choose Me," portraits of candidates in the 1988 presidential election, and "Comedians," an exceptional set of up-close and personal looks at Jerry Lewis, Billy Crystal, Bob Hope, Lily Tomlin, Richard Pryor and Robin Williams, among others.

"State Fair" is published by University of Texas Press and retails for $34.95. It goes for $23.42 at the university's Web site, www.utexas.edu.