Should you be afraid?: Only if you find it in your shopping cart:

Monster House, the upcoming Gil Kenan family film, executive produced by Steven Spielberg and Robert Zemeckis, stars three neighborhood kids who discover that the house across the street is alive and is eating anything and everything that wanders onto its property. After failing to convince others of the house's insidious nature, they find themselves forced to go into the house themselves to stop the maniacal home before it can do any more harm. This is exactly where the game starts off, with three friends tossed into the house that has temporarily been put to sleep due to some highly drowsy cough syrup that the kids brought with them. From there, the "fun" begins.

Most movie licensed games end up copying game formulas from other more successful game properties, and Monster House actually did itself some good by trying to copy Zelda's gameplay from it's NES and SNES classics. This was a smart move, not only because Zelda is such a great game series, but also considering that the story is absolutely conducive to this type of gameplay. It is after all a game about your main characters exploring dozens of rooms in a large house from an overhead 2D perspective. Your primary weapons are your trusty squirt gun and the flash on your camera which can blind/freeze your enemies for a moment, allowing you more time to... squirt them again. The "water" that these guns employ must contain special acids and other combustible chemicals, or so I theorize due to the gun's ability to destroy all kinds of furniture and other evil household goods. 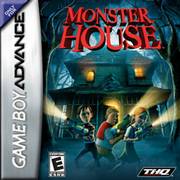 Beyond the basics, the gameplay is very Zelda-like. Enter a room, destroy a few baddies, door unlocks, move on, repeat. You can pick up and throw/squirt pots to find items like candy (health), water (ammo), and batteries (for your camera flash). You play as all three of the friends from the film, DJ, Chowder and Jenny, but you control only one at a time. Each friend can carry various items and has it's own set of health, so when one is weak from attacks, you can switch to a different friend to carry on. Puzzles generally involve finding keys, pushing/pulling boxes around and lots of searching rooms repeatedly, somewhat like Zelda, only less fun. If your character runs out of health, you get kicked out of the house and have to restart from the front door. After all, this is a kids game and you don't die in kids games.

Everything else (sound, graphics, controls, etc.) are all very plain, nothing special and exactly what you would expect from a low budget/low expectations title such as this. Honestly there is just nothing in this package that makes it worth a purchase. Whether you enjoy the movie or not will have no bearing on whether you would enjoy this game. While the game is not so childish that an adult couldn't play it, it is still a children's game and only a child could see past this game's flaws enough to be able to actually enjoy it. For the rest of you, if you are looking for a good Game Boy Advance adventure game of this style, don't settle for the copycats, just go buy Zelda.