Side effects may include: Drowsiness, irritability and depression

Hardcore fans of the Da Vinci Code book must be absolutely horrified lately. The movie has been getting almost exclusively terrible reviews, and this new licensed game is an absolute mess in many ways. Attempting to cash in on the huge success of Dan Brown's novel, it ends up being an absolute bore in most aspects.

To be fair, it does attempt to incorporate some of the elements of the book/film into videogame form. It's largely based on puzzles, and some of them end up being somewhat decent. Cryptograms, slide puzzles, anagrams and general brainteasers are all over the place, and are easily the most enjoyable aspect of the game. In fact, if The Da Vinci Code were released as a collection of puzzles, it would have been passable. As is, it's a decent adventure/puzzle game interrupted by long stretches of terrible combat and sleep-inducing dialogue. 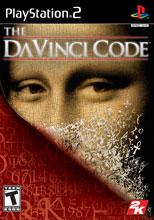 Combat is handled in an overly atrocious manner, requiring gamers to input a "Simon Says" series of buttons to defeat the enemy. Each time you encounter an enemy, you'll be viewing essentially the same animations as the previous fight. The worst part about this is the fact that other enemies can completely interrupt this sequence. Therefore, you can be a button or two away from defeating a fanatical monk or security guard, and all of your progress can be void by another foe entering the equation. It's absolutely infuriating and will make most gamers wonder why they even bothered to include combat in the first place. After all, you're playing as a symbologist, not Indiana Jones.

Enemy AI is borderline retarded, and their field of vision makes the genome soldiers of the original Metal Gear Solid seem farsighted. You can literally be two feet to the side of a guard or monk, and they won't have the slightest idea you're there. Stealth attacks seem like an afterthought, and you'll mostly have to resort to the broken combat system to put away your enemies.

While it does follow the general plot of the novel/film, it presents it in the most yawn-inducing manner possible. The voice acting is flat and features completely unconvincing accents, and characters tend to randomly stare off into space during cutscenes. They also tend to over-explain every single minute clue or plot point, and some puzzles seem ridiculous or contrived. If this game serves as the introduction of The Da Vinci Code story to anyone, I wouldn't blame them for absolutely detesting it.

Animations are jerky and unnatural, and environments are wholly uninspired and ugly for the most part. The only redeeming aspect of the audio is the music, which fits the mood of the story perfectly. All of the other sound effects and combat noises are generic and bland.

Remember the area in Zelda: The Wind Waker that featured the huge amount of slide puzzles as a sidequest? It was a decent distraction, but the real appeal of the game lied in the adventure and combat aspects. Unfortunately, The Da Vinci Code only offers these semi-enjoyable puzzles, and completely fails in every other aspect. Even if you're a huge fan of the novel, I'd have to imagine you'd be hugely disappointed by this mess of a game.