When gamers heard the news that Rockstar was developing a title exclusive to the Xbox 360, rumors ran wild. Would it be a new Grand Theft Auto? A new franchise entirely? Well, no:it was a ping pong game. The internet reaction was unanimous: the announcement was the biggest "what the fuck?!?" moment in a long time.

After playing the game, it becomes apparent that Rockstar can make solid titles that don't involve beating hookers with golf clubs. Table Tennis features some truly deep and strategic gameplay that can be an absolute blast at times. All of the face buttons will hit the ball, and each one performs a different spin. Like in Sega's Virtua Tennis, you can start charging your swing long before the ball arrives, and use the left analog stick to determine the placement on your opponent's side of the table. So basically, if you want to do a mean right spin, you can charge the B button before the shot arrives while simultaneously holding right on the stick. Pull too far to one side of the table and the controller will vibrate to warn you that the ball will be hit out of bounds. 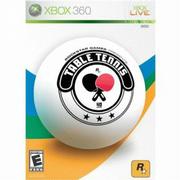 The biggest control issue has nothing to do with aiming or hitting the ball, but rather how your character moves. There are times that you'll inexplicably move to the left or right after swinging your paddle, thus setting up your opponent for a killer shot to your unprotected side. Watching some of my friends play for the first time, I heard the phrase "why is my guy moving that way?" more than once or twice. It's not a constant problem, but it can still be costly and annoying when it does happen.

As you charge swings, a Focus Meter in the top corner will fill up. Holding the right bumper while you hit the ball will drain it and allow you to perform "focus shots." With these, the camera zooms in and slows down and allows you to hit with added precision and speed. If you completely fill the meter, it will begin to flash. In this state, your character will hit the ball ridiculously fast and be extremely difficult to defend against. The left bumper serves as a "soft shot" which will make computer opponents hit the ball out of bounds more often than not.

Table Tennis's biggest weakness involves its lack of game modes. Single player is limited to basic tournaments and exhibitions. There is no doubles mode or career mode to be found anywhere in this title. Opponent AI is solid and will vary their playing style from time to time, but it simply can't compare to the multiplayer experience. Playing against a friend can be an absolute blast, and XBL matches do a great job of keeping up with the speed of offline matches. There is a rare glitch that makes it look like your opponent has completely frozen, while still keeping the ball in play. It's very distracting, but it doesn't happen that often.

For being a ping pong game, Table Tennis is ridiculously stylized. The overall presentation is extremely slick, and the use of audio is excellent. After a volley of about ten shots, fast paced electronic music fades in to heighten the tension. Music plays only during these moments and replays, and fits the mood of the game perfectly.

Ever since The Matrix, far too many games have tried to incorporate slow-mo and bullet-time to sometimes terrible results. Table Tennis manages to fit it into gameplay without ever being disruptive in the least. All character models look absolutely fantastic as well. Outside of some rare clipping issues (mostly involving the paddle going through the table), the graphics are excellent.

While it does feature some unlockable characters, outfits and stages, Rockstar Table Tennis simply doesn't offer enough in terms of single-player. Playing on XBL can be fun for a while, but can't compare to playing on the same system. If you've got some friends to play against, Table Tennis is absolutely worth picking up. It's fast paced, great for pick-up-and-play gaming and sold at a reduced price. Here's hoping a sequel offers doubles play and something resembling a career mode.