Good: Big quest, lots of stuff to do

When the words "free roaming" are used to describe a video game most people think of the Grand Theft Auto series or one of its many copycats. Enter Atlus' Steambot Chronicles, a free roamer that feels more like a Sunday stroll in the park than a Saturday night drive by.

The game begins with Vanilla Beans, the unfortunately named main character, waking up on a beach. Stricken with amnesia, Vanilla discovers that he is being cared for by a young woman named Connie. Connie needs to return to the city of Nefroburg because her band, The Garland Globetrotters, has a gig that night. Vanilla agrees to accompany his new friend to the city in hopes of protecting her from bandits and uncovering clues to his past.

Steambot Chronicles plays like your average free roamer when Vanilla is on foot. You meet people, make conversation choices that have no real bearing on gameplay and play one of the many minigames. It's possible to play pool, mine for gold, battle in the arena, taxi fares across town and even perform dreadful musical numbers with Connie and her band. 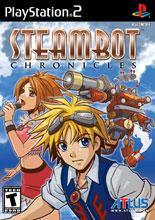 While there are a lot of minigames in Steambot Chronicles, there aren't a lot of good ones. Taxiing people from one place to another is tedious due to the unresponsive controls, slow movement and frequent load times within the city and mining takes no skill and minimal effort. The only fun minigame is the arena, which simply takes the game's combat and confines to a specific area.

The on-foot story missions are equally as tedious and painful. Often, they require you to travel from one place to another as a passenger pigeon, relaying information from one character to another and then back again. While that's boring enough on its own those missions are made even worse by load times that seem to occur every time you cross the street.

Traveling to Nefroburg and any city in the game requires the use of a trotmobile-a steam-powered bipedal robot. Trotmobiles play a key role in Steambot Chronicles since they are the only means of long distance transport and the only source of combat.

It's easy to see what Atlus was trying to do here-create a control scheme that mimicked how an actual trotmobile would control, but just because a 20-foot-tall robot controls like a 20-foot-tall robot doesn't mean that it's a joy to pilot. Even little things like negotiating a bridge become an exercise in frustration and once you've adjusted to the unique control scheme it's still slow moving and unresponsive.

Combat requires the use of L1 and R1 to control the trotmobile's left and right arms, while L2 and R2 boost and jump, respectively. It is also possible to pick up objects and even other trotmobiles by pressing down on L3 and R3 at the same time. At the game's beginning you're limited to getting in close to your enemy and pummeling them into oblivion. As the game progresses you're able to purchase new arms for your trotmobile that can turn it into a chainsaw wielding death machine, a long distance sniper, an armor-plated basher or any combination of the three.

Trotmobile customization is actually one of the best things about Steambot Chronicles. You can choose the color, design your own logo, outfit it with various attachments that affect gameplay and even give it a name (I call mine Shirley). Aside from the superficial benefits, it also adds a layer of strategy to the game. It's possible to equip different kinds of legs for different terrains or manufacture more powerful weapons by combining two weaker ones and your trotmobile's overall weight determines how fast it will move and it's gas mileage.

Simply put, Steambot Chronicles is at its best when piloting a trotmobile. While the controls are awkward, the combat is engaging on a base level and the story missions are far more entertaining. One finds you escorting a caravan across a desert, fending off marauders. Another mission has you pursuing a group of kidnappers well into enemy territory. Along the way there are also dungeons that feature rare items and there are a large number of bosses in the game that also help break up the monotony.

The game has an interesting visual style that mixes cel shading with realistic environments, resulting in a game that looks like an Anime. At times the game falls victim to some slowdown and the camera can be a problem at times. It also features some great voice acting for the principle characters. The music ranges from tolerable to repetitive and, again, the Garland Globetrotters songs are truly awful.

25 to Life, Narc, the True Crime series-the gaming industry is littered with the remains of hyper-violent, misguided and unoriginal free roamers. It's nice to see a different take on a genre that has become largely populated with GTA wannabes. While Steambot Chronicles may not be for everyone, fans of Sci-Fi and Anime will be satisfied and anyone in the mood for something slow-paced and original might be pleasantly surprised.