By By Roger Moore - The Orlando Sentinel

The man won 200 races and seven NASCAR titles. Fan-friendly, folksy and wildly popular long after his final run around the track, NASCAR fans don't call Petty "The King" for nothing.

So you request your audience with "The King," even if the movie you're making is a cartoon about talking race cars. And even if you're Pixar's John Lasseter, of "Toy Story," the reigning king of American animated film.

"Richard is stock-car racing," Lasseter says. "He's like, the first call you make."

The director of the new animated film "Cars" went to races and did his homework. He wanted to make a movie about taking a small-town break from "the fast lane." Because, as he says, he figured out during a family RV trip that "life's about the journey, not the destination."

He wanted to tell this story with talking cars. The most famous cars in America are race cars. And, in addition to movie stars such as Owen Wilson and Paul Newman, Lasseter wanted authentic voices for the cars.

"You don't get much more authentic than Richard Petty," Lasseter says. 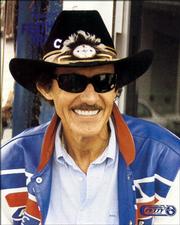 He's got that right. Petty, who turns 69 next month, is an iconic figure in a burgeoning sport. He's still its most recognizable figure, even though he retired more than a decade ago. His sunglasses, cowboy hat and ever-present grin creep into the voice too. He speaks in the drawling Andy Griffith cadences of NASCAR history.

But Petty has a racing and endorsements empire to run. He's busier than ever. He had to be sold on the idea of voicing a movie character.

"They showed me the car my character was to be," Petty says, "and I got tickled. It was the 1970 (Plymouth) Superbird. Heckuva good race car, but they only let me race that one year. I tell ya, it was the raciest race car we ever had. The deal was, it looked like a race car, whether it had a number on it or not. Big ol' wing an' all."

Given Pixar's track record, it hard to believe the animation studio's latest is so bland. Apparently, anthropomorphized machines are a whole lot less fun than anthropomorphized fish, insects, toys or monsters. "Cars" features dazzling visuals that bring to life the motion of NASCAR racing. But the storytelling is just so ... mechanical.

Tickled or not, Petty still wouldn't sign on to do the voice of The King in "Cars." Not until he had some notion of what it was about.

"And he goes, 'Respect people. Respect tradition. Just a good, honest story about how people are supposed to treat people.'

"John was just telling that story with cars. But I like that message.

"I told him, 'I hope some of these race car drivers out there today hear that message too.'"

Petty liked the movie's other message, about small towns that the world has passed by. In "Cars," a race car (voiced by Owen Wilson) gets lost on the way to a big race in the California desert and lands in Radiator Springs, a forgotten ghostly town off Route 66.

Radiator Springs is like his home in Randleman, N.C., Petty says. "Built the interstate a mile and a half from downtown, and that's where the Wal-Mart goes, the eatin' places, all went. The interstate. You can drive through Randleman, wide open, and not hit a thing."

"I asked her what kind of car she should be, and she said, 'Oh, a station wagon. That's what I used to drive the kids to the races in,' " Lasseter says.

"And what color should she be?

Now Lasseter, whom Time's Richard Corliss calls "the soul of Pixar," had the seal of approval of The King, the soul of NASCAR. He had The King doing a character. Corliss has called "Cars" "a classic ... the first great movie of the summer."

Petty says of the movie that "race fans will pick up on all this stuff they stuck in there and just run with it."

"NASCAR buffs'll remember that Hudsons won everythin' in sight in the early '50s."

Lasseter, 49, just assumed a role as chief creative officer of animation when Pixar merged with Disney. He worked on a string of Pixar hits in the 1990s until that day when his wife told him, "You're going to wake up and wonder about all the stuff you missed," he says. She meant family time. That's what inspired a cross-country RV trip ("We dipped our toes in the Pacific, drove to the Atlantic, dipped our toes there, and drove back.") And the trip, he says, is what inspired the movie.

So it has nothing to do with tying into the popular and fast-growing sport, with all its toy and promotional tie-in possibilities? No no, Lasseter insists. Petty, jokingly, isn't so sure.

"The only thing that's gonna bother me is that they're selling all these little cars and trucks and T-shirts and everything," he says with a grin. "One for all of the grandchildren. That's gonna break me."