Austin, Texas — It's safe to say that The Flaming Lips are a world unto their own.

Their concerts are a psychedelic swirl of balloons, animal costumes and strobe lights, and that's to say nothing about the fake blood.

"We kind of little by little are building up to something that looks like the mothership that Parliament/Funkadelic took out, where we have an elaborate, freaky spaceship that I can land in and crawl out of," says Wayne Coyne, the band's charismatic frontman and maestro of Lips spectacle.

After the Lips' last album, "Yoshimi Battles the Pink Robots," its new opus, "At War with the Mystics" is comparatively normal. The disc is, in some sense, a political protest album rooted in contemporary times, rather than an intergalactic sojourn through fictional worlds.

But "normal" is a relative measure for the Lips. In everything Flaming Lips there is both fantastical imagination and a heartwarming optimism in the face of isolation and despair.

Sound strange? It is.

So how did a band that formed more than 20 years ago in Oklahoma reach such singularly absurd heights and at the same time become one of the most critically acclaimed acts in rock?

The Lips formed in 1983 and went on to produce 10 albums in the '80s and '90s. The lineup has changed over the years, but it has mostly centered on Coyne, drummer Steven Drozd and bassist Michael Ivins. 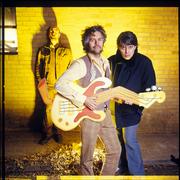 The band became a kind of one-hit wonder for the trippy bubblegum single "She Don't Use Jelly," off the 1993 disc, "Transmissions from the Satellite Heart." They also famously performed the song on "Beverly Hills, 90210."

After years as a successful indie band, things changed notably for the Lips in the late '90s, specifically in 1997 with "Zaireeka," a wildly experimental four-disc album meant to be played simultaneously on four stereos.

It was made after guitarist Ronald Jones left the band, but the new expansive sound, Coyne says, was a result of a change in perspective. In 1996, Coyne's father died, devastating his family.

"We were always singing about a psychedelic, a psychic confrontation with the wonders of the world and the horrors of the world, and death being somewhere where they cross," the 45-year-old singer-guitarist says.

The now revered producer Dave Fridmann, formerly the bassist of the band Mercury Rev, first began collaborating with the Lips in the late '80s and has produced nearly all of their albums.

"Zaireeka," he says, is when Coyne developed "that idea of hearing multiple music sources simultaneously that may not necessarily have anything to with each other, but actually form a greater whole."

But aside from any sonic changes, it was when The Flaming Lips became fearless.

"I think it was more a new approach to things mentally," Fridmann says. "I think all of us collectively and individually threw off the shackles of indie rock and preconceived notions of what we could and couldn't do. And I think we've followed through on that approach song by song, record by record since."

Next came 1999's "The Soft Bulletin," viewed by many critics as one of the finest albums of the '90s. Coyne's honest, unfiltered lyrics, particularly on the disc's centerpiece, "Waitin' for a Superman," resonated for many.

"I think you hear me singing about, 'What do I have to hide?'" Coyne says. "I just said, '(Forget) it, I'm just going to say it, and I'll see if anyone's behind me.' And I said it, and I looked around, and everyone was behind me."

Even more lined up behind the Lips after 2002's "Yoshimi," a similarly ambitious concept album that, given its cosmic metaphors, was a risky follow-up to the landmark "Bulletin." It was the group's most commercially successful album yet.

"It does come across a little bit absurd we're talking about 'Don't let the robots eat me,' and all that, but within that, I think we feel that it's really about one friend sticking up for another," says Coyne, who describes the album as a "sunshiny, funeral-esque sort of thing."

"At War with the Mystics," however, is a little (just a little) more direct. It can slide comfortably next to "Bulletin" and "Yoshimi" as the third post-"Zaireeka" Lips album, but it's also as playful as the earlier work and likely to be defined by its political themes.

On "Free Radicals," Coyne takes aim at George Bush: "You think you're radical, but you're not so radical. In fact, you're fanatical."

"I don't think all the record has a radical, political, overthrow-the-government sort of vibe to it, but I think some of it does," Coyne says. "But I don't want anyone to think that I really am trying to overthrow the government with our music, or stop the war with our music. That's just for fools."

On "Yeah Yeah Yeah Song," though, Coyne points the finger back at himself, wondering if he could do any better. He sings, "What would you do with all your power?"

One of the disc's finest songs, "Sound of Failure/It's Dark ... Is it Always this Dark?" is from the perspective of a teenage girl trying to live "from the inside out" after a personal tragedy. It also names Britney Spears and Gwen Stefani as examples of music that doesn't "know what it means to be dead," that is, acknowledge the real pain in life.

Coyne, whose mother died during the making of "Mystics," describes the song as fighting against "that cheerleader mentality of nothing bad can happen to me as long as I'm smiling and dancing."

"Music that moves you usually comes because something horrible has happened to you. It's cathartic," Coyne says. "I think music does that better than almost any other art form because most of our lives are about things that don't work out."

In the end, maybe The Flaming Lips aren't as out of this world as they seem.